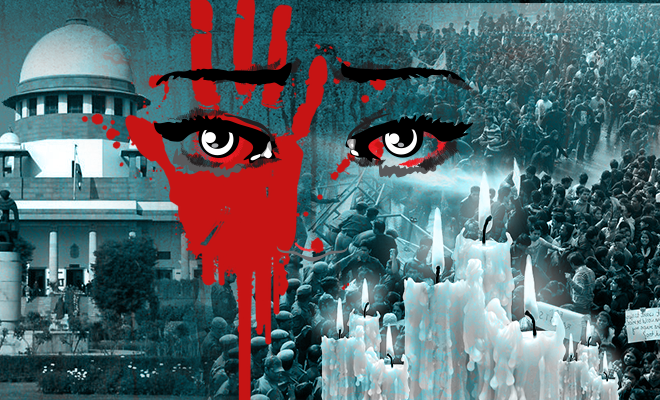 It’s Been 7 Years Since The Gruesome Nirbhaya Rape Case, But Nothing Much Has Changed.

Seven years ago, this date, that is 16th December instilled a certain sense of fear in all of our hearts after Jyoti Singh, an innocent 23-year-old was brutally gang-raped in a bus by six men in the capital city of India. She was beaten with a rod while at it, gutted for her intestines and then thrown out of the moving vehicle.  Seven years ago, Jyoti Singh was given the title of ‘Nirbhaya’, as the case left us in a torturous fix, bringing us face-to-face with the kind of monstrosities the so called humans are capable of. From going into shock to walking into candle-light marches and letting our boiled blood make noise for justice, they say that the Nirbhaya rape case left the nation at a loss of words. But today, seven years later, I’d like to add to how it didn’t just leave the nation out of words, but also out of action. Because honestly, nothing much has changed since. At least, not for better.

You would think, that after being privy to the demonic act that was the Nirbhaya case, the nation, the justice system, the police and even the men in our country would have been shaken out of their misogynistic slumber, to realise how they’ve all been failing the women in our society. But I guess that’s too much to ask for.  Because in a sad turn of events, it so happens that even the most inhuman act of violence and assault against a woman was not enough to make people stop raping and ravaging women in this country.

Also Read : Nirbhaya, Disha… IPC Section 228A Calls For The Name Of The Victim Of Rape To Not Be Disclosed. Why Is This The Victim’s Shame?

From December 2012 to 2019, the statistics of rape cases reported has magnanimously elevated. From 6-month-old babies to 60-year-old woman to a 100 year old lady on bed rest, no woman is safe and if the current state of affairs is anything to go by then it doesn’t seem to be getting any better anytime soon, either. In fact, what is more worrisome is that in a country that is among the top 10 most unsafe countries for women, the conviction rate in rape crimes is as low as 32.2 %, and this is after the laws to deal with sexual assault have been made more stringent. Even taking Nirbhaya case as an example, it’s been seven years since Jyoti Singh was attacked in a bus by six monsters. She was raped, gutted, beaten, broken and thrown out. She died a few days later in a lonesome hospital bed, but the convicts in the case still continue to live on, as their death penalty still lingers on.

Will break my granddad's record after hanging 4 Nirbhaya convicts together: Proud moment for Pawan Jallad

Too late & where is the juvenile?

It's been seven years 🙏🙏 nirbhaya is still waiting for justice #Nirbhaya pic.twitter.com/S9FxvjPSux

It is during such times, and honestly speaking all the others as well, that we feel the need to encounter the four accused in the rape crime and murder of veterinary doctor Priyanka Reddy, was in fact justified. At least the family, the nation did not have to wait and see them make the most of their borrowed time while comfortably nesting in a jail cell. No matter how much people claim otherwise, justice delayed is justice denied. And the only way we can ever be handed justice in this country is by preempting assault.  And for that, there needs to a fear of consequence instilled in the minds of the people. There might have been several measures being taken to ensure greater security, but it feels no more than a compensation for justice and police department’s failing the women in the first place.

Most of the offenders and convicts, just as in the Nirbhaya case as well, admitted to not being remorseful of their actions, and thought they would be able to get away with it. And if there is one thing that has changed after that gut wrenching incident, it is that the predators now don’t just rape and leave, but try to kill and close the case all by themselves. We are living in a country that seems like to be running on borrowed time for its women and it is a matter of shame for all of us.

And hopefully, before more such cases like Nirbhaya, Unnao, Kathua, Disha and others become the only things we are left with to remember our country by, there will prevail both – change and justice. Or so we hope.

Also Read : Nirbhaya’s Friend Was Making Money By Giving Interviews After The Incident, A Journalist Has Said. We Hope It’s Not True