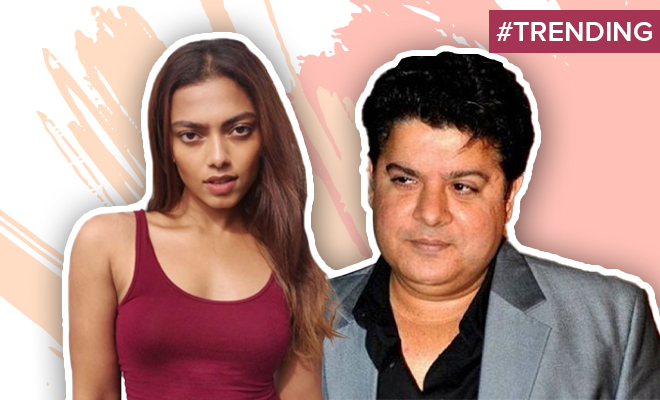 Indian Model Paula Has Accused Filmmaker Sajid Khan Of Sexual Assault. Are We Going To Let Him Get Away Again?

Justin Timberlake said ‘what goes around, comes back around’, and as a firm believer in pop culture and well, the theory of karma coming to bite you in the ass philosophy, I agree with this. Which is why, after years of staying unscathed despite their loathsome actions, when men  were called out, accused and being made to pay for their transgressions with the #MeToo movement, I was excited. But perhaps what we didn’t catch on was that we were a tad bit too quick in our celebrations.

#MeToo may have come in as a wave, taking down a lot of people who were well protected what with their power  and affluence, but almost just as soon as the wave receded back to the shore, there lay the men – tainted but not completely dusted. Accused, but untouched. Guilty, but not proven so. And just like that, the movement and the women with it, started losing their faith in the little ray of hope that had come around after years of being oppressed and staying quiet.

But choosing to ride against the tide once more, is Indian model, Paula who has again dared to speak up against the sexual harassment she faced. She accused filmmaker Sajid Khan of harassing her under the pretext of offering her a role for the movie Housefull. Taking to her Instagram account, Paula opened up about her own experience when she was as young as 17 years old, and shared how he didn’t just try to speak dirty to her, but also tried touching her, and asked her to strip in front of him, to get her a role in his film.

She wrote, “When #MeToo movement started, a lot of people spoke about Sajid Khan but I did not dare to because like every other actor who has no godfather and had to earn for a family I kept quiet. Now I don’t have my parents with me. I’m earning for myself. I can dare to tell that I have been harassed by Sajid Khan at the age of 17.” She continued, “He spoke dirty to me. He tried to touch me. He even told me to strip in front of him just to get a role in his upcoming Housefull movie.”

Also Read : Katrina Kaif And Amitabh Bachchan Sign A Movie With #MeToo Accused Vikas Bahl. Why Do The Men Get Away So Easy?

However, she hasn’t been the only one to pull the mask off of the filmmaker. There have been several women in the past, including the likes of actress Rachel White, assistant director Saloni Chopra and a journalist, all of whom have been brazen about the harassment at the hands of this monster the industry has so wholeheartedly chosen to forgive.

Out of the hundreds of men that were exposed in our own Bollywood and corporate industry, not even 10% of them were held held accountable for their actions. In fact, most people that were pulled up, conveniently opted for a social media exile during the time much like the women harasser Sajid Khan, only to be later exonerated in front of the fans and media, all the while proof of their harassments, assault and victim testimonies were still being overlooked, as if these were just suggestions and not actual allegations.

I finally decided to share my story with you. Writing this was like re-living all that horrible past I’d chosen to let go of, but I knew if I don’t today, I may never. So here’s #metoo #MetooIndia https://t.co/brouTYIBC7

I stood like an idiot in one corner of the bedroom wondering where to sit and he was on one side on the treadmill. I clearly rem this episode. When he saw me walk in he goes “pls come this side” all smiling . I walk up towards the treadmill . He was directly staring down at me

Sajid Khan has preyed on women in the industry for years. Here's my story. #MeToo pic.twitter.com/Rufzs9dsp6

The same breed of men – the accused, are then offered roles in movies, a seat as a judge on a TV show panel and opportunities to create movies, with absolutely no setback in their career paths. Think  Alok Nath, Kailash Kher, Vikas Behl, Anu Malik…the list goes on. Whereas the women who stepped forward to speak of the sexual injustice are still fighting for their truth, while the people and industry chooses to embrace only the ones that were being assholes. Of course that is up until they are men, because when the one on the media trial is a woman like Rhea Chakraborty, she must be guilty. She must be responsible, and so even without any concrete evidence yet, she has been made into an outcast, a witch and a murderer.

It is disappointing to see that public sentiment only ever gets riled up when it is a man who has been (allegedly) wronged, meanwhile women can sing songs, write long descriptive narratives and yet not have enough people ready to hear their side of the truth. Because after all, it is always the women who’d be expendable to the society, never the men. From grabbing the collar of a woman who is yet to have her trial in the court, to dusting dirt off of people who are sure-shot assaulters, the fact that men will always get away is unnerving.

Hoping this time the sexual predator doesn’t get a clean chit, Paula wrote about how she realises she did wrong by keeping quiet earlier, but now she understands that is was only because she was a child who was affected by the entire incident, way too much. Hoping he is put behind bars, we wish such incidents instigate some lost emotion in the public, to re-focus their energy on the ones who are truly guilty and worthy of hate.

Also Read : Actress Maanvi Gagroo Reveals That She Was Subjected To The Casting Couch Just Last Year. Did The #MeToo Movement Have No Impact At All?