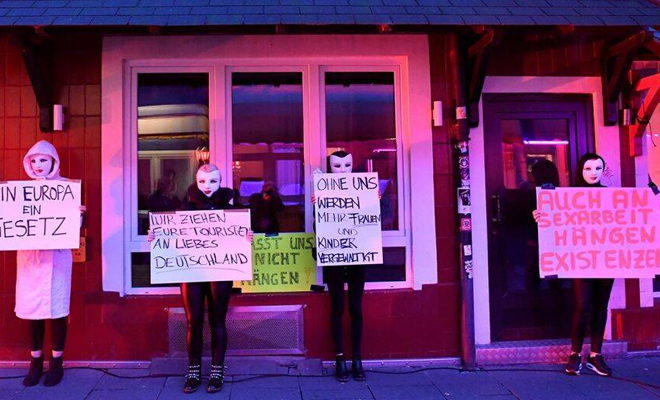 In Germany, Sex Workers Protest The Continued Closure Of Their Work. It’s More Dangerous For Them To Solicit On The Streets

To put it crudely, their business requires them to solicit customers. Sex workers are, due of the nature of their job, are required to put their selves on display to acquire business. But in Germany, sex workers are now holding up posters asking that their business be allowed to restart. Around the world, sex workers have been the worst hit due to the coronavirus spread, their businesses having come to a screeching halt, with the chances of re-opening looking remote and bleak. In Pune, sex workers were allowed to resume work with stringent health measures in place. SOPs have been issues and masks, gloves and hand sanitisers have been made mandatory. It might not be the sexiest of experiences but at this point, but at least they have been allowed to resume work.

In Hamburg, Germany, where sex work is legal, the brightly lit signs of licensed sex premises wear a sad look about them. They’ve been shut down since March and sex workers are now protesting. As restaurants and other premises opening up, sex workers are claiming they are being singled out and discriminated against because of the nature of their work.

Organisations working with them are claiming that the shutting down of licensed places is forcing sex workers to find work on the streets, a far more dangerous prospect. The Association of Sex Workers, said in a statement that “Prostitution does not carry a greater risk of infection than other close-to-body services, like massages, cosmetics or even dancing or contact sports.Hygiene is part of the business in prostitution.”

Sex work has been affected around the world, with people in the business struggling to make ends meet. Closer home, Ruchira Gupta, Founder of Apne Aap Women Worldwide, has been providing meals to families of sex workers to ensure they don’t go hungry.

While these are unprecedented times for everyone and job losses are rampant, a little compassion towards those whose businesses are struggling, wouldn’t hurt.

Denmark Prime Minister Postpones Her Wedding For The Third Time. She Prioritised Her Country And That’s Inspiring