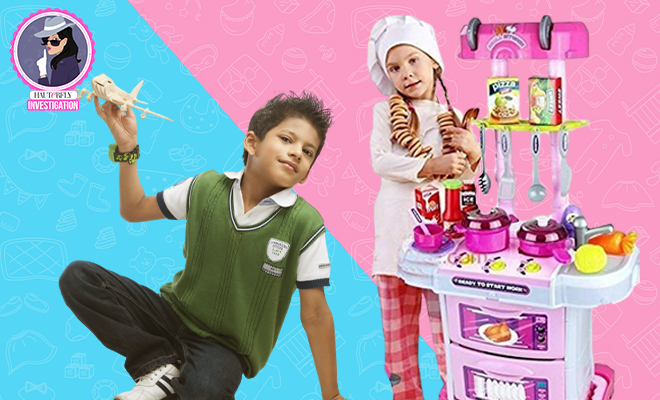 Hauterfly Investigates: Why Are Pink Kitchen Sets And Toys Are For Girls While Boys Play Cars And Video Games? There Is Sexism Even In Toys

Have you ever noticed how children are bombarded with opinions and suggestions of what is appropriate for their gender? Little girls are told to believe in princess’s while little boys are told to never cry. And this is just one small example. In fact, this segregation starts even before they are born with ridiculous gender reveal parties. The entire premise of “pink is for girls and blue is for boys” is problematic. Why must we force our children to conform to societal norms at an age that they are most impressionable.

You see, the other day I was happily scrolling through Amazon looking for the perfect gift for my 5-year-old niece. That doesn’t sound like a difficult task, does it? And yet, it was painstaking. The entire Amazon search result page was filled with kitchen sets, toys that represent domestic chores, dolls and pretend makeup kits. Basically, I felt like I walked into one giant stereotype. Needless to say, I was disappointed but it had tugged at my curiosity. I shifted my search to Google to widen it. However, as soon as I typed in the words, “toys for girls” I regretted it. Every single thing was overwhelming pink and the toys on every site were the same. More kitchen sets and more toys that represented household chores. And every single toy was stark pink. It was like a unicorn had thrown up all over my Google search but only in that saccharine shade of pink.

The Sexism In Toys Is Where It Starts

It’s enough that our daughters are conditioned to believe that everything must be pink and glittery. Their clothes, bedroom even their play mobile phones. But why do they need a pink kitchen set? Pink Legos? I found a pink miniature set that had an iron, washing machine and a  sewing kit. Please someone explain to me why does a 5-year-old girl need a pink sewing machine toy? If you ever stopped to wonder where stereotypes are and are continuously propelled, you now have your answer. I was extremely disappointed to see the kind of junk that comes up when you search for toys online. Boys play with remote-controlled cars, guns even archery sets and girls make up stories with their dolls. FFS, sexism is evident even in toys!

To understand just how these gender-biased toys affect children, we spoke to Jasleen Gupta. She has a 6-year-old daughter and hence she knows exactly how and why gender-stereotypes play a huge role when it comes to toys and other preferences of a child.

She said, “I was very particular in keeping everything very gender-neutral. Just things that I thought were nice to have. As an infant, you only have things like rattles and books and toys that make noise. But then a lot of items I got as gifts, right? And those always tend to be a little more girly because I think people play safe.  People often think that ‘if I give a boys item they might think I am just re-gifting. But the fact of the matter is that the boy-girl divide is very evident. Even when you walk into a store, they will ask you kiske liye hai? Girl or Boy? That’s the first question, age and gender. They will also gift wrap it accordingly. I think the question needs to change to, how old and what do they like? Because they could like certain kinds of things.”

All this brings one episode of FRIENDS to mind. (The one where) Ross doesn’t like it when his son, Ben plays with a Barbie doll and tries his best to get him interested in a GI Joe toy and of course, Dinosaurs. Remember that? In the end, it was revealed that Ross himself would dress up as a girl, when he was younger, and have tea parties. The bottom line is that gender shouldn’t have anything to do with what toys the child plays with. If a girl likes HotWheels and video games or if a boy likes dressing up his Barbie doll, it should all be normalised.

The thing is, right now colours and toys may seem harmless, inconsequential even. But studies show just how easily the perception of children is manipulated when they are told what colour is gender-appropriate. Researchers Sui Ping Yeung and Wang Ivy Wong studied a group of 129 kindergarteners in Hong Kong. They divided them into two groups. One group was told that yellow is for girls and green is for boys and the other group was not given specific colours. An article regarding this study reads, “A change in kids’ colour preferences occurred when genders were assigned to yellow and green: both girls and boys in the label group expressed a greater liking of their gender-corresponding colour than in the non-label group. In other words, simply telling a girl “yellow is for girls, green is for boys” make her more likely to prefer yellow over green.”

And add to that that pink is assigned to things like toy sets of cooking and what not and what you have is basically a children’s version of ‘go make me a sandwich.’ When you tell a kid who looks up to you that they are required by society (and basically you) to play with gendered toys, you are making a case for misogyny pretty early. How can expect our children to grow up and understand gender equality if we are classically conditioning them since infancy? Girls are being told to play only with pink toys while the boys are being told to play with toys that are all shapes and colours. Anything but pink. The gender divide begins here.

So, what’s the solution? Should Amazon and Google be more careful when it comes to toys or does the entire conversation need a shift? I think both and the change needs to start from the very grassroots and work its way up. It would be easy to say that parents need to have a more gender-neutral approach. But the truth is, no matter how hard the parents try, there are too many external factors that affect each child. They are majorly influenced by social reinforcements that encourage gendered behaviour. Just think of all the different reactions the children get from their peers, parents and teachers when they choose to play with toys that don’t correspond to their gender. This is particularly applied to boys, who are steered away from “girlish” things like the colour pink and Barbies.

Talking about her own daughter Jasleen said, “Now that she is 6, she herself has developed a lot more interest in the outdoor which she didn’t have earlier. And in things like legos and stuff like that. But she still plays with dolls. She does her pretend play. So we just base things on what she likes. She doesn’t have the concept of this is what girls should do, this is what boys should do. But when she goes and plays with friends and meets other kids they often tell her ‘this is like a boy’. Then she says ‘oh I am not wearing shorts, I am dressed like a boy’. So those are things that come from the outside and I had to fight very hard to explain that it’s not true.” Further adding, “So she will wear shorts now, but she refuses to wear pants. She says ‘I am not a boy, I will not wear pants’. And this is another concept that she has gotten from somewhere and she refuses to get it out of her head. Because she is a very girly girl. She loves her jewellery and her hair done and long hair. So that is something she naturally is.”

Also Read: This Fashion Brand Got Backlash For Its Kids Clothing Line That Hypersexualises Little Girls. It Is Inappropriate And Sickening.

It’s not difficult to track how these “gender-appropriate” rules can carry on throughout our entire lives. If girls are taught to like pink toys and play with kitchen sets, they are automatically being pushed in a track that teaches them that women have to take care of the kitchen, do the domestic chores and be interested in beauty and fashion. So while we ‘share the load’ now, if you’re going to peddle a pink washing machine to a girl, you’re driving home the point that that is her job to do. And don’t need any of that. Now, it’s not wrong to like these things. It’s wrong to force them on children who are malleable, instead of giving them the freedom of choice. Boys gravitating towards cars and girls gravitate towards dolls is a product of nature and nurture. And while we might not be able to change the nature aspect of it all, we should try and change the nurture.

And this isn’t true for just toys. Kinder egg, which is basically a chocolate egg, is sold in pink and blue colours. It’s so annoyingly stupid. FFS, the kid gets a toy, should they put together a doll or a plane isn’t for you to decide. Oh, by the way, we tried it, the chocolate on both tastes exactly the same.

The bottom line is that colour-coding toys/ products to appeal to specific genders is hampering the growth and the psyche of children more than we realise. And while making everything gender-neutral is not the solution to closing the gender divide, it will help us from “toying” with our children’s futures.