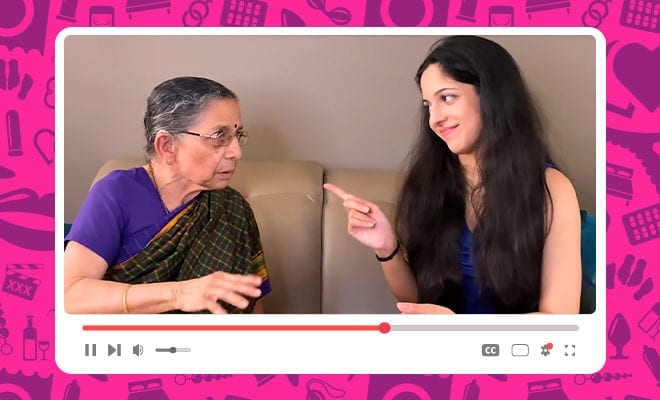 From Consent To Contraception, This Girl Talks To Her Grandmother About All Things Sex In This Video

In India, there are a number of topics that are considered too taboo to be spoken about. From menstruation to masturbation, most of these topics revolve around women and women’s health. However, the one topic that tops this list is sex. Personally, I have never understood the whole stigma surrounding what is a basic physiological need for every human being. But try explaining this to your mother. Indians hardly receive a competent sexual education. And that is a major problem. It’s no wonder that so many men have no concept of consent or that there are so many misconceptions about contraceptives, no one has ever told us this stuff. But today, I watched a video that really left me enlightened. You see, music performer Avanti Nagral made a YouTube video with her grandmother and it’s about everything sex. It’s the kind of conversation everyone parent and grandparent should have with their child.

The wholesome video is entertaining as well as educational. Avanti’s grandmother candidly talks about all things sex. From why it’s such a taboo to contraceptives to consent and respect, it’s not every day that you hear an elderly woman have such contemporary views. Further in the video, it was revealed that Avanti’s grandmother and grandfather were formerly the presidents of the Family Planning Commission of India. This video is a healthy conversation and we hope it inspires more women to indulge in similar healthy conversations as well with their children.

The video starts off when Avanti asks her grandmother why sex is such a taboo topic. She replies saying, “Sometimes what happens in our society, there are two extremes. Formerly, sex ‘Oh no no no’. And now even teenagers are talking and not talking but thinking about sex. So, these are two extremes according to me. Because sexual feelings are unique in a human being.” Aaji (Avanti’s grandmother) also said, “A person from teenage to youth, that period is very turbulent. The hormones are changing. So many changes occur in the body. But those changes should be taken and looked at with respect and restraint.”

Further on, Avanti asks her grandmother about consent. She says that since a lot of people having sex younger and there is such a stigma surrounding the topic, no one really talks about consent. In response to her question, her grandmother said something we all need to keep in mind at all times. She said, “Consent is the first thing. But even after that, you have to think about the consequences also. So, consent and consequence both you have to be taken into consideration.”

On the topic of consent, Avanti asks tells her that after marriage, a lot of men seem to believe that they have some right or ownership over their wife’s bodies. She asks her grandmother what her thoughts on this were? Aaji said, “No that should not be the case. It’s a mutual thing. But sometimes what happens, she may not be keen but he may be keen. So she should respect his feelings and he should respect her feelings also. Respecting feeling is very important even in married life.”

This is something that needs to be told to every person on the threshold of marriage. Mutual respect is the most important thing and gender has nothing to do with it. I am in complete awe of this woman and her views. The way she candidly spoke about a topic that most woman her age don’t even acknowledge is honestly commendable. And I loved her even more when she said sex is, “mostly for pleasure. The outcome is a baby”. She is so casually breaking through numerous stereotypes.

Also Read: People Reveal The Stupid Things They Were Told In Sex Education Class. Mainly That Sex Is Bad

Further in the video, Avanti and her grandmother talk about the shame that surrounds sex and contraceptives. They discuss how women have so many more options when it comes to contraceptives than men. From diagrams to IUD’s, it’s the kind of knowledge that every man and woman should have. Avanti’s grandmother then goes into the biology of it all, explaining how a woman gets pregnant and what contraceptives do to prevent it.

Aaji says that sex is more than just physical, it’s also emotional and mental. This is why it shouldn’t be taken lightly. And after watching this video over and over again, I strongly believe that Aaji should hold a TedTalk and impart sex education that is so clearly lacking in our country. What do you’ll think?

The moral of this video, as explained by Avanti, is that the main things to remember about sex are consent, consequences, safety and respect. We want to thank Aaji for keeping it so real.

Study Says Many Women Don’t Know Where Their Vagina Is. So Sex Education Sucks Globally And Not Just In India?