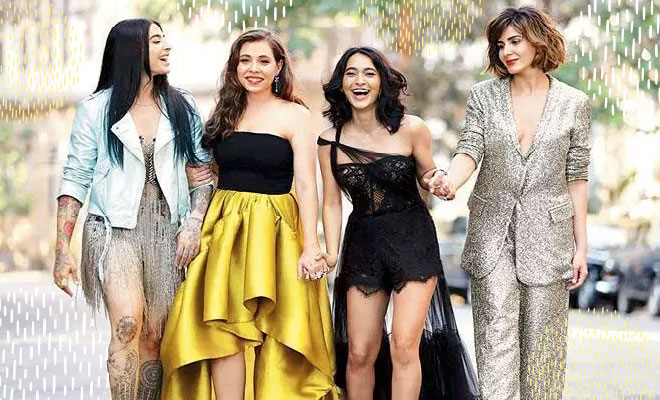 Four More Shots Please! Gets A Season 2 And Here’s What We Are Expecting From The Show

TV shows are my new respite for anything and everything in life. I’ve become the kind who’d rather invest in memberships at Amazon Prime and Netflix than in human interaction, for good reason of course. Be it after a long day at work, sometimes even during work, or during long and lazy weekends, there is a one stop solution for all of that cumulative boredom and that is binge watching. One such show being Four More Shots Please! that released earlier this year in January and left people wanting more.

The show, that took us on an interesting trail of lives of four best friends – Damini (the fearless journalist), Anjana (the successful lawyer), Siddhi (the perfect daughter) and Umang (the badass fitness trainer), and their daily struggles. These women work their way through relationships, work issues, insecurities and a bunch of other things. Things that resonated with every girl out there. Clearly, women really connected with is because the show is coming around for round 2.  Maanvi Gagroos’s tweet revealed this and honestly, we are all excited.

The first season took us through some important and rather real-life situations of a woman from being gay, to a single mother to breaking glass ceiling, and sometimes the struggle with unrealistic standards set by parents. There was fun, there was laughter, there was drama and there were tears. Left at a rather cliff-hanger where their world has spiralled out of control, we are looking forward to see what the next season holds for us and these women.

We are expecting a lot more from the second season, because by far, this has been a hard hitting reality check for everyone who views women’s challenges as nothing more than trivial. From touching base on body shaming, to being gay in a world laced with hypocrisy, this show treads along all the sensitive topics that others blissfully brush under the carpet. We are also hoping the story takes a deeper turn and talks about achieving that work-life balance and the women taking their flaws in their stride, now that they have come to accept them. We also hope to see a fresh takes on the wardrobe of the show, that have been as gripping for us as the storyline.

While we may not be yearning for a cliche happy ending, we sure are expecting to see how all four of them bounce back from the low that the show’s last season left us at. Guess we’ll have to wait to find out!