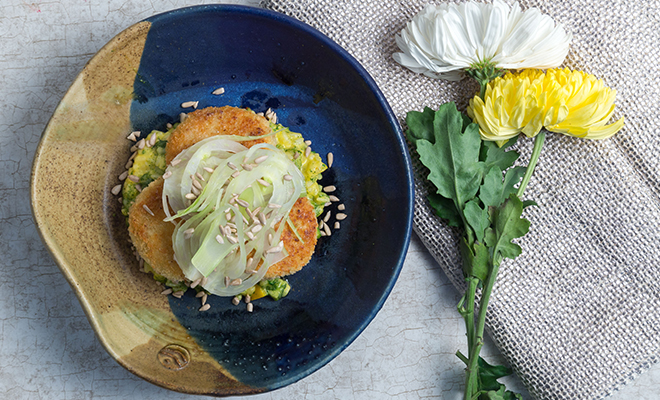 Is there such a thing as a disillusioned diner? I think there definitely should be, and if there’s no term for it yet, I’d like to patent it, please? There seems to be a lot of us floating around the city. People who love to eat, who live to try new things, who want to experience something just beyond the usual and slightly mundane, but are most often disappointed by a food climate that’s safe, to say the least.

But there are a few stand outs, and Olive Bar & Kitchen is one of them. It has been amongst those culinary mainstays on the food map of Mumbai since it opened its doors 15 years ago. But reinvention is necessary to stay relevant and AD Singh knows this. So to celebrate this anniversary, Executive Chef Rishim Sachdeva changed up the menu for the first time in 6  years. And boy, are the diners in for some fun.

This new menu is focussed on Mediterranean and European flavours, allowing the fresh ingredients to sing while showcasing techniques like sous vide and fermentation. Also, Chef Rishim made it amply clear that nothing on the menu came out of a packet, and that’s definitely something to write home about.

Onto the dining experience, let me first just say that entering Olive Bar & Kitchen transfers you to a different time. The pretty lighting, the whitewashed walls, and even the music — everything is distinctly Mediterranean, which automatically feels like an oasis in the middle of the bustle of Bombay (Mumbai is a city, Bombay is an emotion, remember?)

We started with the Trio Cauliflower and Leek. Now, admittedly, cauliflower is among my least favourite vegetables, but when the Chef insists that it’s a must-try, who am I to argue? And boy, am I glad I didn’t.

He expertly played with its texture, serving roasted cauliflower, along with a puree as well as a raw crumble. Served with leek oil and leek-infused XO sauce (Chef Rishim’s favourite), it was a party in my mouth. And the best surprise were the roasted cocoa nibs that gave a whole new flavour dimension to the vegetable dish.

Next up was the Crispy Mushrooms and Feta Cheese, a classic combination served with Honey and Mushroom Caramel and the addition of another kind of mushroom — the Pickled Oyster Mushrooms. Being fried crisp in a batter makes this quite a heavy starter, albeit very tasty, so you might want to adjust your order accordingly.

We couldn’t get enough of cheese, as per usual, so we ordered the Rosemary Baked Brie. This pretty plate had a whole brie served with pickled radishes, roasted organic butternut squash, crunchy watermelon radish, and fennel seed lavash. The vegetables were colourful, crunchy, and had the right amount of sweetness to complement the creaminess of the brie.

To be honest, I was already getting kind of full, but I couldn’t show any weakness of course, and besides, I hadn’t even got to what I knew were going to be my favourites on the menu.

Alaskan Scallops and Oysters On The Shell came out in quick succession, one better than the other. First up, the scallops that came seared, and as a ceviche served with homemade coconut yoghurt made out of coconut milk in a pannacotta-esque texture that was divine. In addition, it was served with caramelised cauliflower and refreshing quinoa tabuleh. The oysters were also served in 3 separate ways, my favourite being the one straight up with the fresh tomato salsa, only because I like to taste as much of the sea as I can when I eat oysters. So, no muss-no fuss works the best.

It was at this point that I realised that we hadn’t even progressed to the mains. We decided to skip the pizzas and pasta section in favour of some good ol’ fashion meat. And I’m so glad we did. The Baby Lamb Ribs were slow braised and served with the most intense tasting carrots ever. Trust me on the carrots.

Finally, the Crab Cakes and Yellow Pepper Risotto was the perfect bowl of piping hot comfort to end my meal and the perfect precursor to tucking myself in for 8 hours of perfect sleep. And just as I was relishing these thoughts, it turned out that we weren’t being allowed to leave without some sassy meetha. It’s strawberry season, so we veered away from the chocolate route and tried the Strawberry Mess. A beautiful mess of strawberry compote, sponge cake, and meringue. And after that, the deal was well and truly done.

But the thing is, there is so much exciting stuff on the new menu, that it’ll take me close to 4 separate visits to sample it all. And with Chef Rishim’s promise of a balanced meal using fresh ingredients, international techniques and general creativity, you know you’re going to be in for quite a ride each and every time.