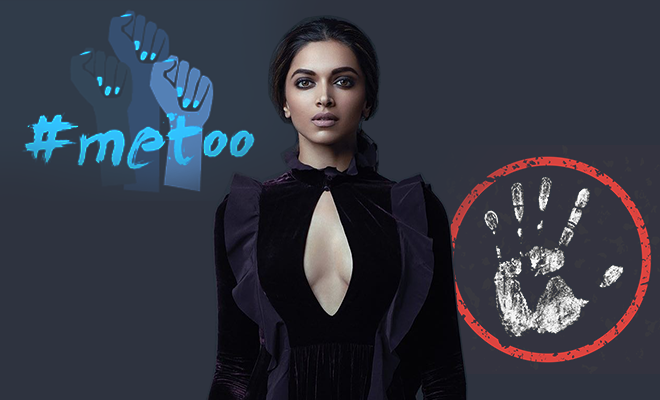 Deepika Padukone Will Not Work With Someone Accused In The #MeToo Movement. We’re Glad She’s Taking A Stand

Deepika Padukone, who wears the crown of the queen of Bollywood at this moment, has always managed to be the nation’s favorite. And for good reason we’d assume. From picking up empowering roles and delivering on them a hundred percent, to always saying the right things at the right time, the actress has time and again proven her worth to her fans and won their loyalty fair and square. That was up until she was spotted leaving Luv Ranjan’s house with actor and friend Ranbir Kapoor and raised speculations that she might be working with him. Which otherwise wouldn’t be a problem but everyone was worked up because he’s another accused in the #MeToo tribe.

Also Read : Deepika Padukone Working With #MeToo Accused Luv Ranjan Has Us And Twitter All Riled Up And Rightly So!

Now, fans of the actress, naturally did not take it well and started vehemently opposing the idea of their favourite actress working with someone who has been accused of sexual harassment. Not like others haven’t been doing it and bringing down the movement enough, they were hoping she wouldn’t join in on this herd mentality. They even started using a #notmydeepika hashtag for the actress to express their discontent and caution against doing something like this.

Deepika who hadn’t come up to either confirm or deny the rising speculations, has finally given her take on the entire situation, in an interview with Vogue India. When asked whether or not she would go ahead and work with an accused in her career, she said, “No! I would not!” and boy are we glad to hear her say that.

Because honestly, with several people from the industry still aiding and abetting such predators by welcoming them back with open arms and giving them work, case in point – Anu ‘Pervert’ Malik, Alok ‘unsanskari‘ Nath, and the likes of them, we wouldn’t have been surprised to find out Deepika was tempted to sign on the dotted line despite the people involved. But it’s heartening and hopeful to see her take a stand and say no to working with someone who has been called out for his sexual misdemeanours.

The actress who is to play the role of an acid attack survivor in her upcoming movie Chhapaak has once again reinstated faith in her fans by taking a stand against such predators and categorically stating that she would not work with them. Something  Bollywood must learn from, as opposed to working alongside such men who are a disgrace to the human race.

Also Read : Deepika Padukone Gives It Back To Salman Khan For His Silly Remark On Depression. We Think It Was About Time

Sameera Reddy Opened Up About Her Breastfeeding Struggles And It’s Honest AF.

Kajol Devgan Is Worried About Her Outfit’s Train In The Rain. But There’s So Much Else That’s Not Working In This Outfit!