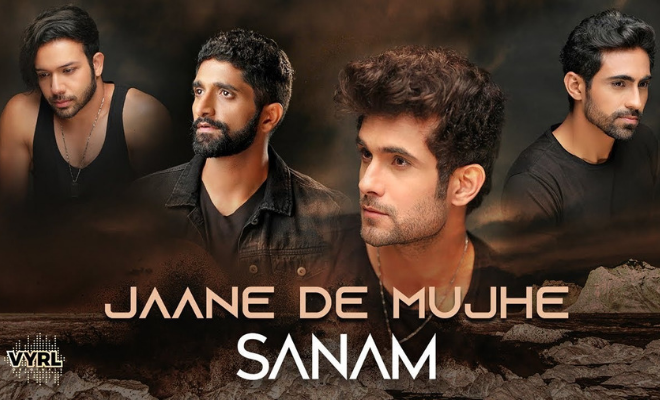 I love my job, and I know almost nobody says that. But, I have a concrete reason to support my statement. I get to meet a lot of celebrities and while I am not always gushing and do try to maintain some decorum, many times, I don’t. Recently I got a chance to interview the very pretty boys with kind hearts and fabulous boys of SANAM. If you know who they are you are probably envying me, and for those who don’t, well… keep scrolling. And then feel free to look them up and then be envious of me.

SANAM is a four-member band comprising Sanam and Samar Puri along with Keshav Dhanraj and Venky Subramaniyam. The band got together in 2010. Initially, the band would do cover songs of the well-known artists like Kishore Kumar, Mohammad Rafi, etc but with different beats and they caught the ear of the youth.

They grew bigger and garnered a larger audience. In 2012, Sanam Puri got his big break in Bollywood after the band got introduced to Vishal-Shekhar. The same year, the band catapulted into the big league when they made a composition for The Amazing Spiderman 2. I mean, we were fangirling but now we want to throw our bras at them.

The band has come a long way and they just dropped their single Jaane De Mujhe with VYRL Originals. The video shows a very pained Sanam Puri who is dealing with his partner who is suffers from mental illness. The story is obviously heartbreaking (I may have cried a little too) and in an exclusive interview with the band, we talk about their new single and the band.

Q: Tell us about your upcoming single?

Sanam Puri:  We were in Israel for a concert and extended our stay. Samar and I were walking and this was the last day. We were sitting at a very beautiful spot and this melody just came into my head and I recorded it on my phone. Two years later, I thought we could probably do something with the melody and take it forward because it was just stuck inside my phone. So, we called Kunaal Vermaa who is the lyricist of the song and he wrote some rough lyrics just to see how the melody sounds with the lyrics and we played the song to VYRL Originals. We thought of making the song personal for people, something about like a breakup or a heartbreak. This is what the song is about – the guy/girl has left the person- and the person is just not able to let go of that person even though the person has moved on. The feeling is still there and  you wish that the person hadn’t left.

Q: Elaborate a little more on the process of creating this song.

Keshav Dhanraj: We showed them(Universal) a couple of our songs and a couple of dance songs of different genres, they really liked this and they wanted a heartbreak song for the first release and so we then got to the production stage where we involved a friend of ours – Prasanna – he’s really good at programming so we worked really hard with him. We sat and  listened to every single sound and chose things really carefully.  When it comes to vocals this is the first time we tried out like 12 different mics.  So went to 2 studios, we tried 12 different mics with 4 different preambs that’s like a combination (Sanam interrupts “48 possibilities”) of 48 possibilities of liking this and there was this one mic that totally worked for us. So, this was a really fun process.

Q: The band is actively promotes the cause of No World Without Women, could you please tell us about your involvement with it?

Venky Subramaniam: Well, it was a song we had partnered with eBay on and it was their campaign. We had done a rendition of theme song of Lakshya and we have always believed that we’d like to highlight the issues of  injustice that women are dealing with. This one was about female foeticide and about the alarming sex ratio is there in India where the female to male ratio is very low, one of the lowest in the world. So this is something I think we had done it last year with eBay. (Sanam Puri corrects: “2 years ago”) Oh, 2017.