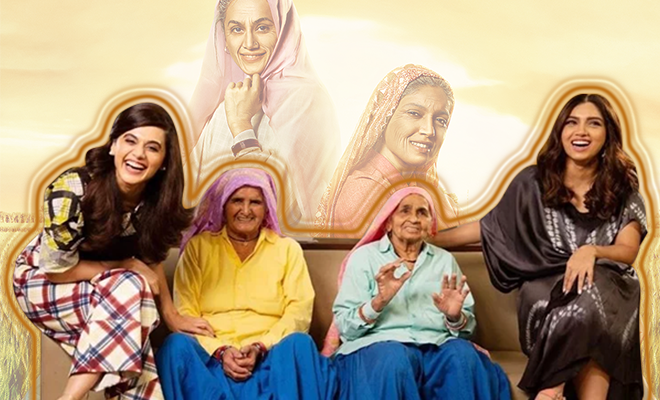 ‘Saand Ki Aankh’ Is More Than A Sports Film. It Is About Women Working Together Towards Freedom.

When we first heard that they are making a film based on the famous ‘Shooter Dadis‘ Chandro Tomar And Prakashi Tomar, now octogenarians, we were elated. We were further excited when Taapsee Pannu and Bhumi Pednekar joined the project, playing the protagonists. Full in aging prosthetics, months of preparation to get into the essence of playing 60-year old rural women, the prospect of a great watch was imminent. And we have to say, after watching Saand Ki Aankh, we were thoroughly moved!

The film is bittersweet, telling the story of two women from a deeply conservative background, hustling through everyday life. The movie has everything…humour, heart and all the halla-gulla in the best way possible. Set in the year 1998 at Johri village of Uttar Pradesh, the film opens up many points in history that millennials would not have known otherwise. From the fact that women were treated as baby-making machines (Prakashi herself has 8 children) to the revelation that they were an integral part of earning a living, yet ignored, was monumental.

The film, in its essence, is the journey these women go through to become one of the biggest names in sharpshooting in the country. But the most delightfully surprising part of the film was its focus on telling women’s stories in terms of working together for the greater good. Chandro and Prakashi are cult favourite sharpshooters, yes, but they did it to pave the way for other women in their family to achieve equal greatness!

The movie has already courted its fair share of controversy. A big qualm about the film was the casting of considerably younger actresses to play the leads. While we have heard both sides of the argument, all that seemed irrelevant because of the convincing performances by the actresses, especially Bhumi. I was mesmerized looking at Bhumi, her body language, her mannerisms, and wise acting being one of my personal highlights.

ALSO READ: Taapsee Pannu Spoke About The Age Controversy Around Saand Ki Aankh And We Think She Has A Point

The film is very well rounded off in infusing it with timely facts and personal experiences. In one instant, we are introduced to a shy Taapsee as a young bride, choosing her pick of dupatta colours, since women were not allowed to show their faces in public back then. A trope they break on several occasions on their path to becoming icons of self-expression in the rural sports world. Directed by Tushar Hiranandani and produced by Anurag Kashyap, the film stays true in its lingo, lifestyle, costumes, and ideas.

Full disclosure, I am not a big crier at the movies. But there are a few moments in Saand Ki Aankh that had me bawling like a baby. Emboldened with strong performances, a tight script and compelling characters, the film never drags. Although I did notice a few cliched tear-jerker moments, I cried nevertheless. The film’s inclusion of trap shooter Seema Tomar and Shefali Tomar as an important aspect of the story was a great call on the part of a storyteller. Why restrict yourself to two great women when you can tell the story of four!

Saand Ki Aankh is yet another example of a fabulous story birthed from the experiences of real women. I went to see the film with my mother and sister and we can so relate to the element of maternal bonding present in the film. There’s no one better to understand the plight of women, than another who is suffering similarly. With an engaging premise, charming regional tone and a soundtrack that will hype you up like nothing else, we are glad that a film like this exists in today’s entertainment space!

Taapsee Shares BTS From The Sets Of Saand Ki Aankh. Hers And Bhumi’s Commitment To The Movie Is Visible