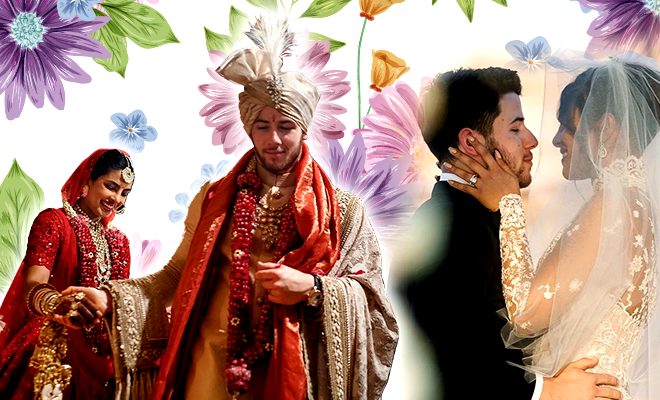 Priyanka Chopra And Nick Jonas Celebrate Their 1st Wedding Anniversary. Here Are 5 Times They Proved They Are Cheesy AF!

There are so many couples who proudly say that they are not in PDA or cheesy behaviour. And I am like no, there’s nothing cool about it. What is wrong in expressing your love openly? This is one of the reasons I love Priyanka Chopra and Nick Jonas as a couple. They are so cheesy and expressive about their romance. Time and again, they have given us couple goals by being there for each other, and supporting each other. In fact, they are a power couple and their combined net worth is a whopping Rs 370 crores. Today, as they complete one year of marriage, I decided to pick my favourite Nickyanka moments and list them down for you. And if you know a guy this romantic, ask him to get in touch with me. Thanks.

My wife is Indian. She is Hindu, and she is incredible in every way. She has taught me so much about her culture and religion. I love and admire her so much, and as you can see we have fun together. Happy Karva Chauth to everyone! pic.twitter.com/ePlcFwWS6V

Priyanka Chopra may be away from her home country for most part of the year but she holds her traditions close to her heart. So when it was Karwa Chauth, PeeCee and Nick celebrated it even if it meant they did it the Jonas Brothers’ concert. And then being the sweetheart that Nick is, he wrote a post that showed how smitten he is. “My wife is Indian. She is Hindu, and she is incredible in every way. She has taught me so much about her culture and religion. I love and admire her so much, and as you can see we have fun together. Happy Karva Chauth to everyone,” wrote Nick. That unleashed a lot of memes and people went mad laughing on how it feels like he wrote this at gun point. But really, jokes apart that’s super cool. We’re just not used to being treated with such dedicated love!

At this point, Nick does more bhangra than drunk uncles at Punjabi weddings. Priyanka and Nick may be from two widely different cultures but love is all adapting to each other’s lifestyles. Nick has been grooving to Bollywood numbers since a while now, especially does it before his concert to feel pepped up! Aww, this officially makes him the national jiju of India!

Let’s just say Priyanka and Nick both are equally cheesy and it’s really cute because we had never seen this side of her earlier. It’s almost like he brings out the corny lover in her and I can’t help but adore them for it. So on Nick’s birthday, she made a compilation of their romantic moments and along with it posted a heart-felt message for her bae. “The light of my life. Everyday with you is better than the last. You deserve all the happiness in the world. Thank you for being the most generous loving man I have ever met. Thank you for being mine. Happy birthday Jaan. I love you @nickjonas,” she wrote.

Now this was literally the most adorable thing ever. At the MTV Video Music Awards 2019 when the Jonas brothers were announced the winners of the Best Pop Award for their comeback song Sucker, Nick’s brothers reached out to their partners and kissed them, while Nick stood there looking like a sad puppy. He was missing Priyanka Chopra and it was evident from his face. Since Priyanka couldn’t be there, she photoshopped herself in the image and wrote, “I’m always with you, Nick Jonas. Congratulations, Jonas Brothers! I’m so proud of all of you! #sucker.” OMG!

ALSO READ: Priyanka Chopra Revealed Nick Jonas Is A Sucker For Bollywood Music And We Have Proof(Opens in a new browser tab)

The Jonas Brothers’ newest album Happiness Begins has a song called I Believe which Nick says is “a love letter to my wife.” In fact, his brother Joe Jonas had revealed how they used to listen to it on Nick’s Bachelor party and how much he gushed about Priyanka while at it. Here’s how the lyrics go: “Well, call me crazy. And people saying that we move too fast. But I’ve been waiting, and for a reason. Ain’t no turning back. ‘Cause you show me something I can’t live without. I believe, I believe, I believe. When you hold me, it’s like. Heaven coming down. I believe, I believe, I believe.” Aww, I want someone who would dedicate this song to me. Wait, my bae has no romantic bone in his body. *Googles how to sell bae on OLX*

From Priyanka Chopra To Sonam Kapoor, Celebs Have Been Loving Cute Pantsuits And We Would Pick It For Party Season(Opens in a new browser tab)

Nick Jonas Trying To Find Middle Ground While Greeting His Mother-In-Law Is So Relatable!(Opens in a new browser tab)