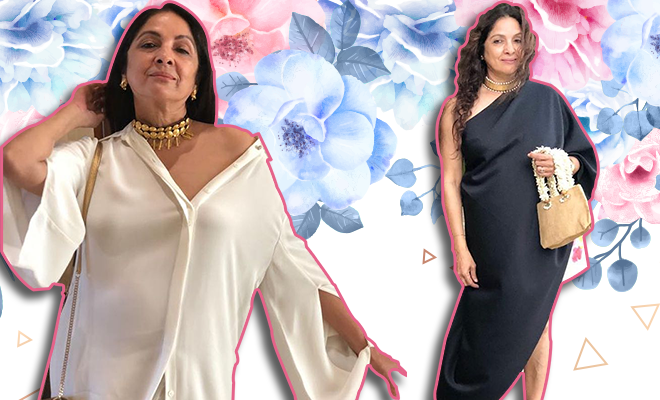 Neena Gupta Is Unapologetically Glamorous And Sexy, Naysayers Be Damned.

Veteran actress Neena Gupta is anything but shy. She is enjoying a kind of renaissance her career has seen post Badhaai Ho, a role we can’t imagine anyone else in now. We will be seeing her more often on the screen now and her recent interviews have been a good insight into this celebrated actress’ psyche. Quite simply put, Neena Gupta doesn’t care about societal norms and her views on a body image are exceedingly positive!

ALSO READ: Neena Gupta And Soni Razdan Have An Adorable Friendship. This Throwback Picture Is Proof!

In a recent interview, Neena was asked about her bold sartorial choices and a very unconventional social media presence for an actress of her generation.

The interviewer pondered on whether hr fashion choices have anything to do with keeping up with the younger actresses. She, in her cool demeanour, replied, “I won’t get younger roles because of the fashionable clothes. I am glad that God has given me a good body. I am fashion conscious and love to experiment. Meri hot pictures ko bahut comments milte hain and the regular photos don’t get many likes. I am enjoying the appreciation I am getting on social media. Very rarely do I get a negative comment.”, she revealed.

Neena did confess to enjoying her current state where she’s busy with a bunch of projects. About the workload, she said, “It’s not too much work but just enough. I feel, at my age, there are a handful of good roles, so I don’t want to miss out on them,”. As for her process of picking  out roles that might not always be the lead she said, “In Panga, I have four to five scenes but the role is good, and I enjoyed working in the film. And, similarly, I signed Sooryavanshi because it is a big film and I play Akshay’s mother but it is not a typical mother role. I love the scenes that they have given me in the film,”, she elaborated.

Neena Gupta seems like the kind of person who doesn’t take herself too seriously. She explored her sensual side freely, captioning her backless blouses with cheeky comments. Her much talked about outfit choices are a mix of sexiness drenched with class and we love this level of confidence in one’s own body. We kinda get where designer daughter Masaba Gupta might have gotten her strong and feminine aesthetic from!

We wish young women were as unapologetic about celebrating their bodies so openly as Neena. Well, lesson learnt!