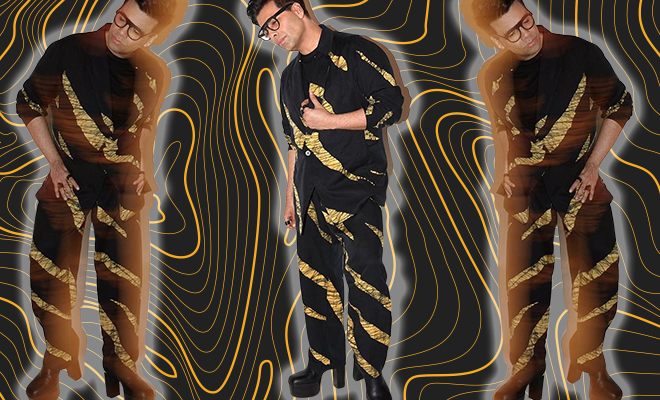 Karan Johar Breaks Gender Stereotypes In The Most Fashionable Way Possible And We Love it!

‘Blue for boys, pink for girls’, ‘Boys don’t wear make-up’, ‘Only girls are supposed to wear heels’, are just some of the things that we’ve been conditioned to believe for the better part of our lives, for no good reason, or any reason at all for that matter. Living in a society that has its head stuck in the previous century, it hasn’t been easy to the so-called “rules” that have dictated the way men and women look at beauty and fashion, but if there is anyone who has always contributed into making a difference at how people view it, it is the famous filmmaker and director – Karan Johar. Who has yet again opened up a strong dialogue, this time with his choice of footwear.

Also Read : Troll Asks Karan Johar To Make A Biopic About Being Gay. KJo Shuts Him Up With His Sarcasm. We Love It

Out of the many in the industry, if there is one person that articulates his style almost just as well as he does his words, it has to be Karan Johar, who has never missed an opportunity to floor us- with his fashion risks or what he would be willing to reveal on national television. Be it by the kind of movies he makes, lifestyle choices he has, or even the kind of fashion he interests himself in, KJo is the kind to always make a statement, and this time he did it wearing black leather high-heeled boots.

Making a rather dramatic and charismatic entrance at the Vogue Women of the Year 2019, Karan Johar who attended the event to present and applaud several women from the industry, dressed not  just to impress but also open a very strong dialogue – that about gender fluid clothing.

The producer is known to have a larger-than-life taste that’s not just limited to the kind of cinema he makes, but also reflects in his choice of fashion. Wearing black blazer suit by Issey Miyake, with yellow stripes and a basic black tee, KJo rocked his look with a bold and quirky pair of black leather stilts by Rick Owens. Absolutely owning his high-fashion and gender fluid clothing, Karan Johar’s look since then has garnered hundreds of re-posts and compliments from people all around.

Breaking stereotypes that have existed around men’s fashion, Karan Johar proved that fashion has less to do with gender and more to do with what you want to say and how you want to say it. Because when it comes to fashion, there is no right or wrong.  Experimenting is key and the will and vision to carry off anything, it worked out wonderfully for Karan Johar that night.

And because he’s such a star, there was quickly a buzz around his look.  Actor and friend Shah Rukh Khan also took to twitter to mention his unmatched ‘fashionista sense of style’. He wrote, “Thanks again @karanjohar for The Dust of Gods jacket. Will never be able to match your Fashionista sense of style…but trying….( somebody get me my heels!! ).” And whether SRK gets his pair out or not, we hope this makes other people  understand that we don’t have to restrict ourselves to what we’ve known. Let’s all be well-heeled

Also Read : Kareena Kapoor, Alia Bhatt And Karan Johar Got Asked About The Pay Gap In Bollywood. Kareena’s Response Was Interesting, Karan And Alia Sat On The Fence.