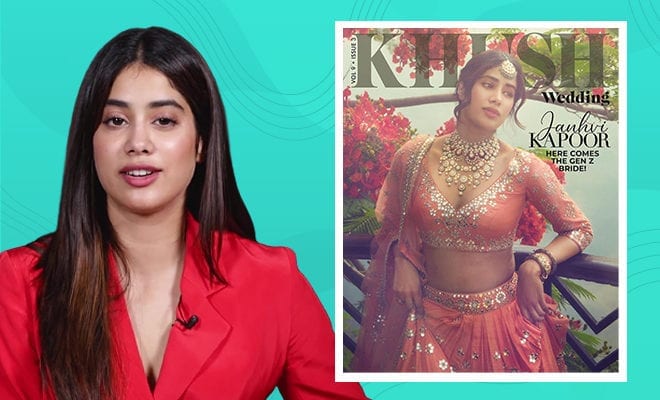 Janhvi Kapoor Posts Another Cover Photo Amid The Second Wave, Says It Was Pre-Committed. Nonsense

The entertainment industry lives by the phrase, ‘the show must go on’. However, in the wake of the pandemic, all activities, barring the essential services, were prohibited from mid April when the second wave of Covid kicked off. This means that no shoots or shows were allowed to stop people from gathering and spreading the virus. Promotions of movies were done virtually, travel was restricted and everyone was asked to stay home (major déjà vu from last year).

Amidst this, Janhvi Kapoor posted a picture from the cover shoot of a bridal magazine in which she is posing as a bride. Before people could assume that she stepped out in the lockdown for the shoot or called her inconsiderate for posting a non-contextual picture in the middle of the second wave, she clarified that it was, in fact, done before the restrictions were imposed and that posting pictures was a prior commitment made to the brand.

She wrote in the caption, “In these trying times, I know it’s important to be sensitive to the troubles we as a country are facing & I would never want to be inconsiderate towards that. This cover, however, and the subsequent posts of it had been committed to a while back and were shot before lockdown. We were as safe and precautious as possible. I hope all of you are staying safe and strong! Love always.”

A few weeks ago, she received flak from followers for another cover shoot of a travel magazine which was shot in Maldives, just before it imposed a ban on Indian tourists. In a post that’s now deleted, Janhvi clarified that it was done before lockdown. She wrote, “Pre committed post, and shot before lockdown. We were as safe and cautious as possible. Hope everyone is staying safe and strong.”

The magazine that conducted the shoot and posted cover images with the actress posing on the beach also issued a clarification. For one of the pictures from the shoot put up by the magazine, the caption read, “We wrapped up our May cover shoot with the gorgeous Janhvi Kapoor ( @janhvikapoor ) at The Westin Maldives Miriandhoo Resort (@thewestinmaldives ) before the second wave of COVID-19 struck India, and we present it here so you can enjoy a slice of the tropical island life, until it’s safe to travel again.” Apart from this, all the pictures had a postscript note in the caption saying, “This shoot took place before the second wave of the COVID crisis hit India.”

Maldives was a pandemic hotspot for Indian celebrities who jetted off to the islands as soon as international flights started again sometime during the end of last year. Janhvi posted a lot of pictures from her vacation and wrote in one of them, “Last to get on the Maldives bandwagon but I fully get the hype.” This was from the first week of April when the lockdown wasn’t imposed but the pandemic was far from over. Although we agree that the show must go on and work doesn’t stop, an exotic international shoot and posting travel pictures could wait. Why not use your social media account with over 11 million followers to help people with leads for beds and Covid resources, instead, in the meanwhile?