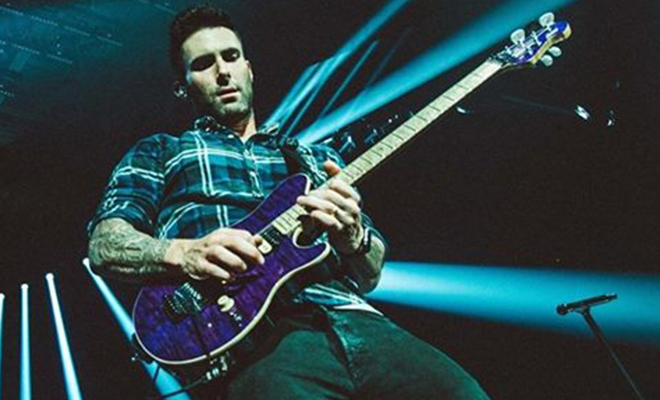 For the uninitiated, Adam Levine is my husband. He just doesn’t know it yet. Now with that out of the way, here’s a very public, very mushy, very inappropriate birthday wish to one of the hottest musicians alive — Happy Birthday, Adam! Would you like my heart or more? *grin*

Singer-songwriter Adam Noah Levine first shot to fame as the lead of his band, Maroon 5, which floored an entire generation with songs like She Will Be Loved and Sunday Morning.

While he did release a few solos as well, he’s still best known to be a part of the band, which continues to create magic and break music records. Adam is also one of the constant judges of The Voice, along with other musicians, including Alicia Keys, Gwen Stefani, and Blake Shelton.

Here’s to celebrating 38 awesome years of this awesome man by booty-shaking to some of his all-time awesome songs. No, I’m not biased at all.

1. She Will Be Loved

One of Maroon 5’s first and biggest hits, She Will Be Loved from the album Songs About Jane showcased Levine’s insane range and unique vocal prowess that sort of paved the way for his career. Not to mention how awkward yet real and sexy the video was.

Another one from the same album, Songs About Jane, Sunday Morning exudes a lazy vibe about the most relaxed day of the week, painting a lovely picture, urging you to get out of bed, make some breakfast while barefoot, and making love on the floor. Ahh, Sunday Morning.

Too much from the same album? But what a breakthrough one it was. A seething breakup song, This Love had heartbroken young ‘uns from the world over singing along with Adam, cursing their exes. Come on, we’ve all done it.

Another angst-y song about being cheated on, Wake Up Call was from the album It Won’t Be Soon Before Long. A very hot Adam Levine shoots dead his partner’s lover when he finds them together in bed, making for a pretty hot, sexy, and gripping video.

Undoubtedly one of my personal favourites, Moves Like Jagger from the album Hands All Over features the powerful vocals of Christina Aguilera along with Adam’s. And the video — so cool!

Featuring Wiz Khalifa, Payphone is a grungy, bordering-on-violent music video with all of Adam’s tattoos showing in all its glory. From the album Overexposed, it’s a call too all those who’s known heartbreak.

I *really* wish this had happened at my wedding. There are mixed reports about whether or not this was staged, but Maroon 5 gate-crashing your wedding with a performance of Sugar from the band’s fifth album V? *blissful sigh*

One of those songs that promises to get in the mood, Animals, also from V, is about raw animal-like sexual passion…with Adam. Dear God.