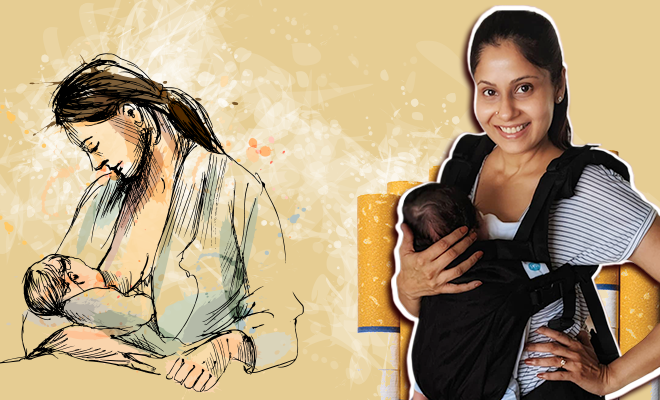 Chhavi Mittal Asks Why Breastfeeding Is Offensive But Smoking Is Not? She’s Got A Point

Indians have a very crooked and selective sense of right and wrong when it comes to things that really do matter. For example, most people would most certainly throw a fit at the idea of public display of affection, but would not lift a finger if they ever see a woman or even a dog getting beaten up by someone. Similarly, we see people lose their calm and get on with their ‘chee chee‘ attitude at the sight of a young mother breastfeeding her hungry child, but are A-okay when they witness people smoking in public or drinking on the streets. Heck, we’d probably either ask them for an extra smoke or just wouldn’t mind them doing it at all. A realisation that recently dawned upon the South Indian actress Chhavi Mittal.

In an interview with Times of India, the new mother who rose to fame with her work in the film Krishnadasi, talked about the post pregnancy struggles, most of which centre around the concept of breastfeeding, which is still considered a taboo among people. She said, “Recently, breastfeeding week was going on. Breastfeeding is a beautiful thing between a mother and a child. It’s a bond that is impossible to break.”

Also Read : Soha Ali Khan Once Had To Pump Breast Milk In An Airplane Bathroom. What About Breastfeeding Is Offensive?

She continued saying, “Those 20 minutes with the baby is bliss. So I like that ‘us’ time to be secluded and with no one around. Yes, there are times when we have to step out of the house with the baby. Public breastfeeding should be allowed. If you are allowed to smoke, drink, abuse in public, why not breastfeeding? It’s the most beautiful and natural thing to do. All of us have done it at some point in time. Why shy away from it? A lot of importance is given to breastfeeding.” The only eyes breastfeeding mothers get are either the prying on personal space ones or cringing at the sight of it.

The actress then went on to say, “A lot of new mothers ask me what to do if they aren’t able to breastfeed their babies exclusively. I firstly feel that one needn’t stress about it. One should exclusively breastfeed the baby for the first six months as it’s important. But if you aren’t able to, due to whatever reason, then top milk is fine. I just feel stressing over it isn’t required as then you won’t be able to produce milk at all.” The fact that women have to even come forward to justify not just the emotional and physical distress of not being able to feed but also the biological aspect of it, is a shame on all of us who are making them feel this way.

It is about time, and it has been this way for a while now, that people get off their high horses and step out of their orthodox thinking to accept, accommodate and make mothers feel comfortable in raising and feeding their children. It is a natural and beautiful process at that, one that we have all had our mothers do for us. More power to women like Chhavi who are speaking up about it to normalise the culture and bring a change.

Kriti Kharbanda Talked About Her Insecurities In A Candid Chat And It Was Very Heartening!