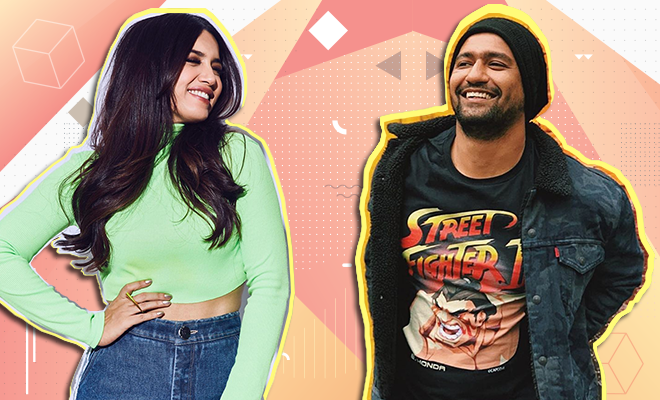 Bhumi Pednekar Just Revealed This One Thing About Vicky Kaushal That Will Make You Love Him Even More!

Right from her debut film, Dum Laga Ke Haisha  to Shubh Mangal Saavdhan, Bhumi Pednekar has been on a roll! The actress has made her fitness journey look easy and keeps updating us with her progress. Lately Bhumi is making headlines for her upcoming film Bhoot – Part One: The Haunted Ship alongside Vicky Kaushal.

The two will be seen on screen for the first time in the film, and Bhumi is all praises for her heartthrob co-star Vicky. Honestly, we aren’t complaining, ’cause we’re as hung up on him as ever! Before the film’s poster was shared by the makers, Bhumi confessed, on the talk show Koffee With Karan, that Vicky is one of her favourite actors and would want to be in a film with him. Well, she’s quiet lucky because she has two releases (Takht too) with the handsome hunk in her kitty.

Bhumi revealed that she was stunned after watching Vicky’s debut film, Masaan and said, “Vicky is one of the most talented actors of today and it’s lovely working with him. It’s a genre that both of us haven’t explored before but I was quite thrilled to experiment with. As an actor, I love to experiment, love to take risks.” Vicky Kaushal is one actor to watch out for, who has a tremendous fan following and is loved by the ladies!

The 29-year-old-actress couldn’t stop gushing about Vicky Kaushal and added, “The first time I saw ‘Masaan’, I was blown away by what Vicky had done. I remember going back to him and asking him how did you do this scene, how did you do that scene? He told me that so many bits of ‘Masaan’ were improvised and so many things him and (director) Neeraj Ghaywan had thought on the spot and I was blown away. He is so talented, so natural, so effortless that I really enjoy watching him on screen.”

Bhoot – Part One: The Haunted Ship, which is slated to hit the theatres on November 15 this year, is produced by Karan Johar. We can’t wait to see the two brilliant actors sparkle on screen!