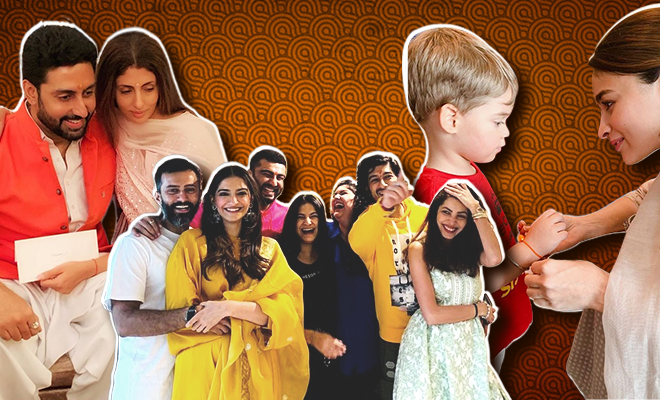 Here’s What Alia Bhatt, Sonam Kapoor And Other Bollywood Celebs Did This Raksha Bandhan. And It’s Super Relatable!

Yesterday, was such a happy day. We celebrated Independence Day. Got rich because Raksha Bandhan. And slept a ton because holiday! So much joy wrapped in one day, and I almost felt like it’s a Monday today. The best thing about the way we Indians celebrate any festival is how the entire family comes together under one roof. You see the same relatives, do the same thing each year and even the food menu is more or less the same. After years of doing the same thing, you know the drill. And while Bollywood may seem like a world much different from ours, it’s really not. It’s just richer. They too do celebrate these festivals, except that I can’t even begin to imagine the gifts the sisters must be getting. Do you think they put money in envelopes?  Or do they just put a cheque? At least, we get to see how our fav Bollywood celebs enjoyed Raksha Bandhan this year. Check it out.

Karan Johar launched Alia Bhatt in Bollywood, and since then she has seen him like a mentor. But that’s not it. KJo also treats her like a daughter, which is why when the filmmaker became a father to Yash and Roohi, via surrogacy, Alia was ecstatic. She is like a big sister to them! This Raksha Bandhan, she took to Instagram to share a super adorbs picture of her tying a rakhi to Yash with the caption: “Just too much love.” Even last year, she celebrated the festival with Yash. Alia is quite a loving big sister and last September when Karan Johar was in Paris, she babysat the kids.

The cute brothers celebrated Raksha Bandhan one day in advance! Their cousin Alia Chhiba tied them a rakhi, while Suhaana was being missed from the fam jam. Suhaana is attending a theatre fest in France, which is why, she couldn’t make it. However, Alia gave us a glimpse into the celebrations as she posted pictures on her Instagram story with the caption “So rakhi came early this year.”

I love it when generations come together to celebrate a festival! So when Shweta Bachchan uploaded pictures from the fam’s Raksha Bandhan revelries, I was all eyes! Shweta shared a loving picture of her with bro Abhishek with the caption, “Cha Ching.” Sure, any festival that makes us rich has us interested.

Navya Nanda, Agastya Nanda and Aaradhya Bachchan too celebrated Raksha Bandhan. So much love under one roof!

When the Kapoor clan comes together, the room is filled with style and richness. Sonam Kapoor, Anand Ahuja, Rhea Kapoor, Arjun Kapoor, Anshula and Mohit Marwah gathered at Anil Kapoor’s residence and what a spectacle that was! Janhvi, Khushi, Jahaan, Shanaya and Harshvarrdhan Kapoor were being missed. Rhea posted pictures from the celebrations, with the caption: “Happy Rakhi everyone! Miss you brats @janhvikapoor @akshaymarwah22 @khushi05k @shanayakapoor02 @harshvarrdhankapoor @jahaankapoor26. Photos courtesy @anilskapoor and @antara_m.”

This love-filled, endearing man uploaded a throwback picture of him and his sister with an equally cute caption. He wrote: “My Bestie, My Protector, My Angel. I love you didi.” Netizens went gaga over this picture and it received around a million likes in no time. Arjun Kapoor commented, “You are a chocolate provider.” Meanwhile, my brother picks the ugliest pictures of mine to post on social media. Why bro why?

ALSO READ: 5 Bollywood Movies That Show The Bhai-Behen Relationship In The Best Way

The bubbly 24-year-old actress was missing bro Ibrahim on this special day. So she took to Instagram to express her love. Sara wrote: “Happy Rakhi to my baby brother Missing you today – touching my feet, giving me money, feeding me sweets and hugging me. I promise to bully you, extort you, greedily eat all your food and force love and cuddles out of you forever. #bestbrother #partnerincrime #safeandsecure (sic).” Thank you Sara, you summed up our feelings perfectly!