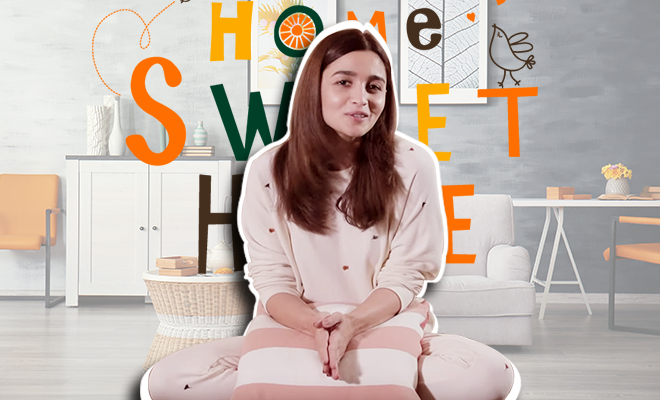 Alia Bhatt Has Moved Into A New House Which She Has Done Up Herself. Her BTS Video Is Super Fun!

In another edition of celebrities being totally unrelatable…Alia Bhatt has bought her own home and done it up herself! Of course she had some help, the actress managed to pull off setting up a home in the mid-20s whereas we can’t even tell from one laminate from another! The young fashionista gave a sneak peek at the personal touch she has managed to give to her new house. She gave us a sneak peek into what went into the making of chez Alia and it’s a super fun watch!

ALSO READ: Alia Bhatt To Start Her Own YouTube Channel To Interact With Fans And We Have All The Deets!

Alia kicked off the video with a heartfelt reveal of how this new house is special to her because she bought it with her “own money and own effort”. Alia is one of the hardest working actresses in the business right now and deserves to bask in that glory with her own space. Good on her!

Alia was joined by her mother and sister to set up the new house. She had a camera crew follow her around on the moving day, where we can witness the crib getting all decked out. Her new place was given a wholesome, simple and homely feel, you know, the stuff of Pinterest dreams. Plenty of grilled partitions and cushions make an appearance with yesteryear actresses on them, Alia’s new house looks damn cosy and if she would have us, we will move in. She confessed that the 2-year-long process was a big change for as this was the first time she was moving out of mother’s house. She will be sharing the space with her sister and we think that’s just adorable!

In the vlog, Alia revealed that she is quite particular about her space, “like a cat”, and we think that’s the perfect representation of her. She and her sister have managed to stuff the house with cute little things they found online and on their many shopping sprees. The décor seems to have been in the making for a while now and it shows. According to Alia, the trick is to enjoy the process and then this big task won’t seem that exhausting. We so agree!

Check out the vlog from Alia’s channel below:

On the work front, Alia will soon be seen sharing screen space with boyfriend Ranvir Kapoor in Brahmastra.  She is also working on a project with her father Mahesh Bhatt on Sadak 2, with elder sister Pooja Bhatt, actors Sanjay Dutt and Aditya Roy Kapur. She also announced another collaboration with Karan Johar in Takht, starring with Kareena Kapoor, Vicky Kaushal and Ranveer Singh.