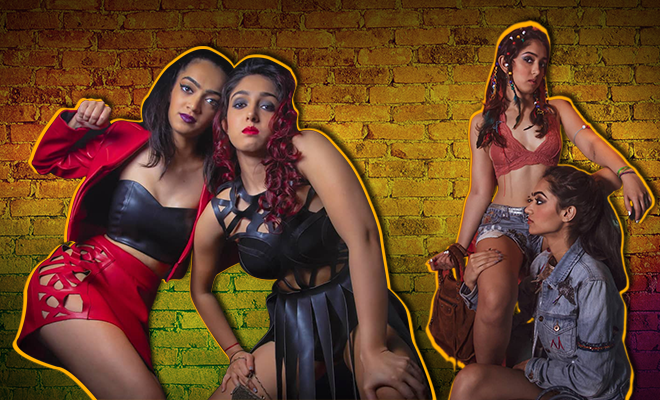 It’s the time that all the star kids are coming to the fore. And even as the nepotism debate rages on, and even if they don’t want to step into the film industry, they are literally born into stardom. Paps follow them around, clicking their pictures and introducing us to them, because we have no idea who they are. And while Sara Ali Khan, Janhvi Kapoor and Ananya Panday have chosen to be part of Bollywood, it looks like Aamir Khan’s daughter might be choosing an entirely different path.

Also read: Zaira Wasim Gets Criticised Because People Think She Doesn’t Realise How Lucky She Is. But She Doesn’t Owe Bollywood Anything!

So Ira Khan recently shared some of her pictures with her friends from a super quirky and bold photoshoot, which has become viral. Each of Ira’s pictures have some message in it and it got our attention. In the picture Ira Khan and her friends are seen donning some of our favourite fashion trends that include metallics and some bright colours too. Their loud makeup is awesome and contemporary, very high fashion and editorial. We want to see more!  Check out these pictures of Ira Khan!

There’s nothing tame about the pictures. In the very first picture, Ira Khan can be seen wearing an ombre golden lip and some fabulously un-curtailed eye makeup while she poses with another model who is lying on her stomach. In the next picture, we see the two women dressed in purple costumes with even louder makeup and bold expressions, as they pose with neon garbage bags in their hands. They are making the mercury soar.

And it gets wilder. We love how irreverent this photoshoot is. Both the girls are seen dressed in black costumes, the makeup is giving us major goth vibes and there are plenty of quirky hand accessories. Some celebrities and fans left comments on the posts. Talented actress Fatima Sana Shaikh reacted to the picture and wrote, “Whoa! Nice!!” A user wrote, “There’s a story to every shot . Who are you!! Two identities in one soul or two different ways.” Another fan wrote, “I think Ira Khan also going on the way illuminati.”

Earlier Ira Khan said about the shoot on Instagram, “Who are you? I’ve never had an answer to that question but at different points in my life, I’ve been overwhelmed by the question or at peace with not having figured out the answer just yet. The exciting moments are when you realize you can choose who you want to be and just how many things you want to be. And also that no one thing defines who you are. In this piece, fashion is my tool of exploration. But it’s just that.. one of the many ways to explore this idea.”