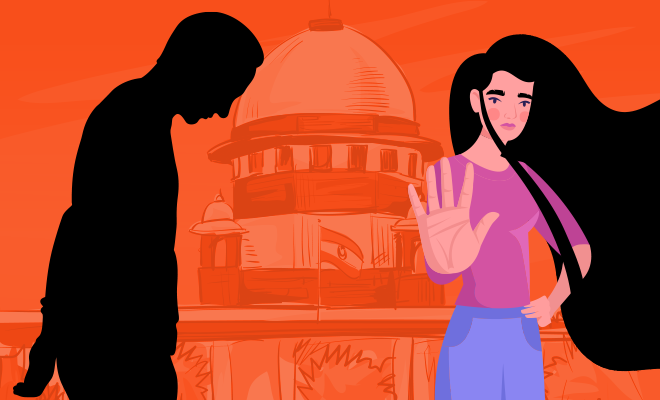 “Consent Of Prior Sexual Acts Will Not Extend To Future Occasions”: Punjab HC To Rape Accused’s Bail Plea. YES!

The concept of consent is unfortunately lost on a lot of people. If two people are in an established relationship, many assume that the need to ask for consent is unnecessary. They even assume that this means that sex is always on the table, regardless of their partners’ mood. This is when things can go south. This can be seen as the Punjab and Haryana High Court rejected this rape accused’s bail plea.

The accuser is a 35-year-old divorcee and a case has been filed under, “oblique motive of extortion out of failed love affair.” The accused has been arrested due to an FIR filed under the sections of rape, criminal intimidation and trespassing of IPC at PS sector 40 in Gurugram. He asserted using his counsel that there was a 48-hour delay in filing the FIR. He further contended that both he and the victim are adults who are in a live-in relationship which can be seen by the photographs placed on record that the relationship between them was consensual.

Justice Vivek Puri said that it might not be fair to completely suspect the validity of the prosecutor and accuser’s statement simply because of the delay. It has also been mentioned on the FIR that the complainant was frightened and under a lot of mental distress while the accused had apologised for his actions. However, it is unacceptable to impose a false case on the petitioner as the statement of the prosecutrix is yet to be recorded regarding whether or not the relationship between both parties was consensual.

In response to the assertion by the accused that the relationship between him and the complainant was consensual and that he was in a live-in relationship with the complainant, Justice Vivek Puri said, “It may be true that the law acknowledges live-in relationship, but at the same time, it has also to be borne in mind that the law also acknowledges a woman’s right to have a sexual relationship. The crime of rape consists of committing a sexual act without consent or against the will of a person. Even on the assumption that if two persons previously had a consensual sexual relationship for any reason whatsoever, the consent of prior sexual acts will not extend to future occasions. It cannot be construed as a circumstance to conclude that the accused gets a right to perpetually exploit the prosecutrix. The withdrawal of consent effectively nullifies the earlier consent and forcibly sexual intercourse becomes non-consensual, attracting the penal provisions of section 376 IPC.”

Yes! I completely agree with him. Regardless of the relationship between you and your partner, having each other’s clear consent is so important and it is high time people understand that a relationship of any sort does not translate into sexual favours according to their whims and fancies.