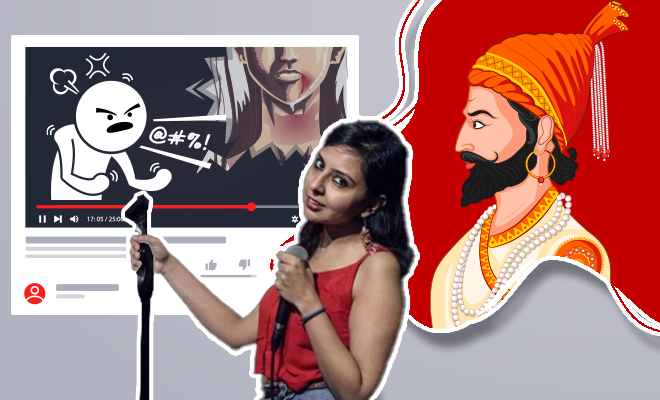 Comedian Agrima Joshua Got Explicit Rape Threats For Making A Joke. Why Do Indian Men Always Resort To Threats Of Sexual Violence?

I’ve often been told by my friends that I am funny and should consider a career in standup comedy. I brush them off, and tell them the audience isn’t ready for my dark sense of humour. They think I am just being an sanctimonious ass, but this is the one thing I am dead serious about. This country can’t take a joke because it’s busy taking offence. And I am not willing to pay the price that comes after. Just ask comedian Agrima Joshua, and you’ll know what I mean. Joshua’s one-year-old joke on the Maharashtra Government building Chhatrapati Shivaji Maharaj’s statue in the Arabian Sea managed to irk a ‘badass’ Shubham Mishra enough to level horrifying rape threats at her.

As is tradition in our country, it isn’t just Joshua but also the other women in her family that Mishra threatens. [Trigger Warning]

Respected @AnilDeshmukhNCP sir 🙏🏽 Does a joke however offensive justify this kind of a public threat to a woman? This Shubham Mishra is issuing a public threat 2 rape & inciting others 2 do so. Clear offence under Section 503 IPC. Can u pls ask @MumbaiPolice 2 take action sir? 🙏🏽 pic.twitter.com/lKyZrl0Ofq

When you see this video, the pure vitriol that Mishra spews and the ghastly detail with which he describes how exactly he is going to teach Joshua a lesson for her joke, sends shivers down your spine. How can someone harbour such hatred, such anger against someone over something spoken a year ago? What did Agrima Joshua joke about and how bad was it that this man-child thought she ‘deserved’ this level of threat? For those ready to offer this raja beta with shreds of doubt that ‘he didn’t mean it’ or ‘maybe she did say something appalling’, or the best one—”But he says he respects women in the end so…,” here’s the joke Joshua made during her set….

We live in a disgusting country. This lukewarm take down of quora users is now a reason to send her graphic rape threats, demand her arrest and go vandalise the venue. Criminal morally corrupt and dangerous af losers. https://t.co/gmCFf55FTZ

Did that feel offensive? At best, it felt anti-climatic. That’s all she said? All this outrage from Mishra over this flimsy joke? Joshua mocked the state government’s decision to build a statue of Chhatrapati Shivaji Maharaj, not the revered Maratha king himself. Last we checked, roasting the government was a valid form of dissent.

It is funny when you think about how often people complain that female comedians are limited in their range of topics. “It’s always period blah blah, men are trash blah blah, female body issues blah blah blah with these girl comedians. So boring!” Well, okay, touché. But do you have the stomach to listen to them get real then? Will you be okay if they talk about politics and mock the government’s inexplicable desire to build mammoth statues which for some reason just feels like an international edition of a ‘mine is bigger than yours’ contest?

I am a marathi. I don't find it offending. She didn't insult Shivaji Maharaj. https://t.co/B2mi3YVIIK

Agrima Joshua did what court jesters, the stand-up comedians of the bygone era, would often do in the courts of the most powerful kings. If the king decided he wanted to build his own gold statue, nobody in his cabinet would have the audacity to tell him otherwise. But the court jester was the only one who could joke about it and make the king realise that if only he made the statue out of edible gold, it would cost him less and satiate the hunger of his poor subjects. It was a subtle way of highlighting a better path.

And he’d get away with it. Because even powerful kings could take a joke about themselves. But as one popular meme being circulated on social media points out, ‘Pakya from Jogeshwari’ can’t even take a joke about a historical figure these days. His history marks might be shit, and he wouldn’t know the first thing about this historical figure’s legacy. But he’s willing to cause physical and mental harm to a living, breathing person from the present to uphold the glory of the past. As if Maharaj’s legacy wasn’t as sturdy as those forts he built? As if it could be so easily tarnished by a harmless joke? As if he needed someone else to defend it, someone who couldn’t respect women? Moreover, if you’ve read up enough on the Chhatrapati’s governance, you’d also know that he’d never approve a frivolous expenditure by his government on a statue, when there were military defences that needed to be strengthened and public welfare to be taken care of.

Also Read: Another Day, Another Incident Of Men Abusing Their Power. A Woman At The Delhi Airport Has Accused Her Managers Of Sexual Harassment

Many have pointed out how Chhatrapati Shivaji Maharaj, the Raje who learnt the most from his revered mother Jijabai, and who upheld Swarajya as one of his biggest ideals, would react to Shubham Mishra’s assault on Agrima Joshua’s freedom. But try as I might, I cannot get over the gender disparity of it all. Even in the event that Joshua’s joke was found offensive, why is a rape threat the first thing that came to Mishra’s mind as a resolution? Why does teaching a woman a lesson always mean asserting sexual dominance over her? What happened to filing a good old court case and letting law take its course? Would Mishra’s monologue be the same if it was a man making the joke?

What’s worse was how he was egged on by the people in his comments, and lauded for giving a ‘mooh tod jawab‘ to Joshua. They compared him to Hindustani Bhau, another social media celeb praised for peppering abuses over his opinions. Once the backlash intensified, with celebrities also condemning him, Mishra retracted, saying that his intentions were never to give a rape threat (wow really?), and he would be clarifying them during an Instagram live the next day.

Luckily, we were spared from listening to any further ridiculous justifications because the Vadodara Police promptly arrested Mishra.

Vadodara City Police took suo moto action in respect of an abusive, threatening video which was uploaded and shared on Social media by Shubham Mishra.

We have detained him and initiated legal process for registration of FIR against him under relevent section of IPC and IT act. pic.twitter.com/XM6J8y4nDx

Once again, our online citizenry didn’t disappoint though. Twitter is flooded with people digging up Agrima Joshua’s old tweets and pointing out that she isn’t exactly a ‘victim’ and should also be prosecuted. There’s the mandatory communal angle about only Hindu Gods and figures being targeted and justification for why Joshua’s words so easily riled up everyone, including Mishra.

But as is pointed out in this thread below, Mishra isn’t an isolated perpetrator. He is part of a problematic culture that lets its people think that if a woman puts one toe out of line, she should be subjugated and shown her place by asserting sexual dominance. Rape, acid attack, sexual harassment… these are tools in the hands of men (and some women) to keep women in check. And apparently, exercising this supremacy is some twisted path to popularity.

A cursory glance through the profile of the man & it hits every beat of trending topics, especially toxic male favourites of 'fake feminism' & 'go to Pakistan'.

In his most recent videos, he's literally said he made the threats because his fans wanted him to speak about Agrima.

To do better, we need to ensure punishment to the many men who are giving brazen threats to Agrima, but individually, we need to be wary of the people and voices we choose to amplify, even – or especially – if it is to laugh at them.

We are only making them more visible.

I really hope Agrima takes strength from all the people speaking for her today, and even more so, I really hope we raise a storm large enough against the men threatening her, so that more women don't have to face the targeted harassment she did.

Agrima Joshua received a lot of support online. But what we often fail to understand is whether this is enough offline too. Imagine receiving a threat like this, being gripped with paralysing fear, unable to do basic tasks, scared of stepping outside your home because what if they meant it? Is that the price we must pay for being women with opinions? Is our freedom of speech defined differently in the Constitution because of our gender? Is the prosecution we must face for being offensive this heinous?

Also Read: Policewoman Sunita Yadav Stopped A Minister’s Son For Breaking Rules During Curfew Hours. She’s Been Transferred And An Inquiry Has Been Ordered. This Is Unfair

One of my favourite shows to come out of OTT has been the Emmy award winning Marvelous Mrs Maisel, where Rachel Brosnahan’s protagonist Midge Maisel is a popular female stand-up comedian in the 1950s. A rare feat in that era, where women had to be homely, attractive, prim and proper but not really funny. You’d think her jokes were all about ‘female problems’, because isn’t that the generalisation? Women only talk about ‘women stuff’ and that means more than half the audience is suddenly uncomfortable and wants her off the stage. But no, Mrs Maisel can give even the most famous male comedians a run for their money, while wearing her fashionable heels.

This is the late 50s in New York, which means it is still orthodox, at least when you compare it to the times we are in. Naturally, Midge’s jokes don’t go down well with many; she even gets arrested for public indecency once or twice. They boo her off the stage, they heckle her, but never,, nobody, not one of those entitled, misogynistic men in the audience threatens to rape her for voicing her opinions and jokes. Evidently, the India of today is more regressive than the 50s of America.

Today, we see international female comedians like Leslie Jones, Kate McKinnon, Samantha Bee, Michelle Wolf,  Tina Fey, Hanna Gadsby and many others speak up on politics. I’m not saying there isn’t fear there; Swaraj may be a man’s birthright, but women are born with fear as an instinct. But these women can say what they want, and not have men make rape threat response videos and get cheered on for it.

And for once, I’d like us to ape the West.

The Dalai Lama Said That The World Needs More Women Leaders. We Completely Agree But Not Only Because We’re ‘Gentle’