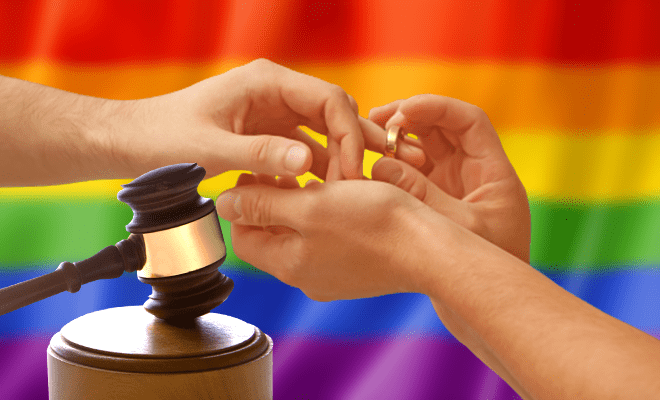 Centre Invalidates Pleas To Recognise Same-Sex Marriage: “Nobody Is Dying Because They Don’t Have Marriage Certificate.”

It is funny and sad how we take a lot for granted, don’t we? The basic right to identify as what we’re comfortable with or be who we want to be with is taken very casually by cis-gendered and heterosexual folks. However, same-sex couples do not enjoy this privilege. We can all agree that there’s a lot of regressive values and belief systems that we Indians are bound to under the pretence of culture and tradition. This narrow-mindedness has seeped into our basic wireframe and has consciously or unconsciously made us oppress a lot of different communities. One of the communities affected by how unaccepting society can be is the LGBTQIA+.

The Delhi High Court has listed a set of pleas that are requesting recognition and registration for their same-sex marriage in India which are set for final hearing on November 30, 2021. In the meantime, the bench of Justice DN Patel and Justice Jyoti Singh have given the parties the time to complete their pleas. The bench tended to petitions filed by Dr Kavita Arora,  Abhijit Iyer Mitra, Vaibhav Jain,  an OCI (Overseas Citizen of India) cardholder Joydeep Sengupta and his partner Russell Blaine Stephens.

Karuna Nundy, Sengupta and Stephens’ lawyer stated that the laws pertinent to their case would be the Foreign Marriage Act 1969, Citizenship Act 1955,  and the Special Marriage Act, 1954 as the couple got married in New York. She continued, asserting that 7A(1)(d) does not specify gender and hence, same-sex matrimonies should be recognised under the same. It states that a ‘person’ married to an OCI for over 2 years should be eligible as a spouse, regardless of gender.

Nonetheless, Solicitor General Tushar Mehta asserted that the term ‘spouse’ refers to husband and wife. Moreover, he claimed that a ‘marriage’ can only exist between a man and a woman. Hence, there is no need to file a particular reply under the Citizenship Act. Sigh! Mehta goes on to say that there is a misconception that the petitioners are under; the Navtej Singh Johar vs. Union of India case simply decriminalizes homosexual activity between adults and does not apply to same-sex marriage.

According to LiveLaw, Senior Advocate Saurabh Kirpal opposed this by saying, “While the case does not expressly allow same-sex marriages, the inevitable conclusion favours recognising it. That is how constitutional matters are interpreted.”

Earlier, the Centre filed an affidavit in opposition to the pleas claiming that it would be in the State’s best interest to not give recognition to same-sex marriages and maintain the exclusivity of matrimony to heterosexual couples. The affidavit claims, “The acceptance of the institution of marriage between two individuals of the same gender is neither recognized nor accepted in any uncodified personal laws or any codified statutory laws.”

Also Read: Ridhi Dogra Talks About The Plight Of The LGBTQ Community: “No One Should Have To Fight For Their Rights”

It is such a shame that in a country that claims to be developing, we refuse to allow our thought process to evolve. Moreover, for a culture that puts so much emphasis on the institution of marriage, isn’t it ironic to invalidate these pleas solely based on one’s personal bias? Here the question has to be asked whether these restrictions and double standards exist due to culture and tradition or are these just guises under which one can keep oppressing the marginalised.