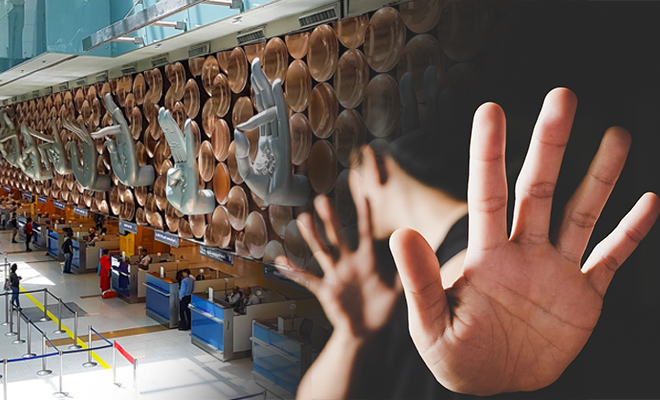 Another Day, Another Incident Of Men Abusing Their Power. A Woman At The Delhi Airport Has Accused Her Managers Of Sexual Harassment

It was made clear to me by my parents, very early on, that the world we live in is not the one we’d been reading up about in fairytales as a kid. Not entirely, at least. For there won’t be castles and prince and princesses and a fairy god mother, but there will definitely a big bad wolf sometimes lurking in the shadows, ready to attack, and other times, right there in plain sight, not even hiding anymore. They are the people you encounter on the daily and who think women are still living at the mercy of men like them, who see them as mere objects, waiting to be ravaged.

From households to streets to work places to even educational institutes, women are safe nowhere, and seems like the recent addition to that list has been the  IGI Airport in New Delhi. As much as it saddens me to admit how this news about a woman being threatened and sexually harassed by her manager at the IGI Airport is not alarming anymore, it is also infuriating to know that men these days have absolutely no fear of authority or consequence.

Turns out, the General Manager  (operations) and duty manager of a private lounge at the IGI Airport, were recently arrested by the police after a 26-year-old woman alleged that she was being sexually harassed by the men. Filing this complaint with the police the very day she was fired from her job for not giving indulging in sexual favours, the police confirmed how, “She told us that both the seniors had been harassing her for months. We registered an FIR under sections of sexual harassment and criminal intimidation and arrested the two men on Thursday.”

Also Read : A Cop In UP Masturbated At A Woman Inside A Police Station. Where Are Women Safe Now?

The 26-year-old also mentioned how, “the senior managers “have been sexually abusing her for six months” and that she somehow managed to escape their “trap”.

The woman further revealed in her complaint that, “The general manager (GM) used to follow me… Once, when I tried to change my uniform at LA-01, he pushed me into a room and told me that he wouldn’t let me go. I pushed him back and rushed to a colleague and asked him to drop me home. But he caught me from behind… He is looking for a way to throw me out of the company.”

She went up to the duty manager after this incident. This guy, in turn, told her that it was her golden chance to impress the other manager with sexual favours. She said, “He then touched me inappropriately. I wanted to slap him but didn’t because he is a senior and told him to behave.” Not just this but often forcing her to come in for specific shifts and then sexually harassing her, the two men had done everything to intimidate the woman and take undue advantage of their position and power.

And even though the case is still under investigation with no word from the accused perpetrators, it is infuriating to find out how some things can never change. Men in power still walk around feeling entitled to harass a woman and that needs to change, for women are no longer sitting with zipped up mouths. It’s time they realise, we’re done being oppressed.

Also Read : A Muslim Woman Sued Starbucks After The Barista Wrote ‘ISIS’ On Her Coffee Cup. This Is Not Okay

GET HAUTERFLY IN YOUR INBOX!
Related ItemsFeaturedTrendinggender based crimesmanagers of a delhi lounge harassed a womanwoman harassed by managers at the IGI Airport