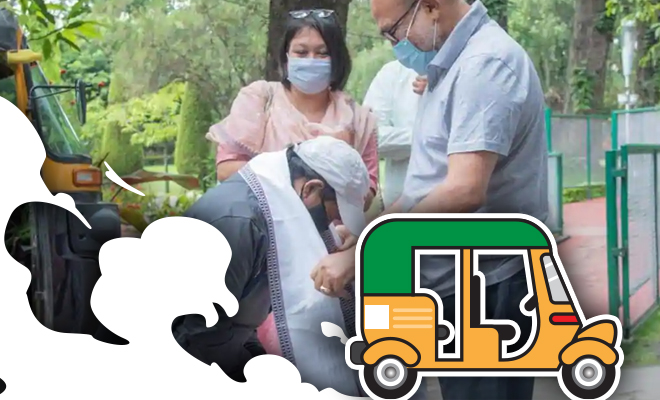 A Woman Auto Driver Drove Over 140 Kms To Drop A Recovered Covid Patient. She’s An Inspiration

In situations of distress and panic, things can go either way. You either see people rally together or completely fall apart. Our flight or fight response is almost a reflex and at that point, it can be deemed selfish. During this time of a pandemic, where people have thinking just about themselves, be it while hoarding grocery items or ignoring those need help, it’s been terrible. But despite all that, there have been a few people during this lockdown, who have proved that humanity is not completely dead, yet.

We say this after coming across the news of a woman auto driver in Manipur, who volunteered to drop a recovered Covid-19 patient to their destination 140 kilometres away. Taking the patient from Imphal to a hill town in Manipur, a distance that would easily take her 8 hours long, Laibi Oinam still did not blink twice before agreeing to help the patient out and drop her home.

The auto driver-cum-street vendor, Laibi Oinam, who is a mother of two children and the sole earning member of the family, took the patient who was discharged from the JNIMS hospital in Imphal late in the night, and drove her home to the Kamjong district headquarters in the wee hours of night on 31st May. And this has to be, by far, one of the most selfless and compassionate gestures to be made, and for a stranger no less.

Glad to honour and hand over a cash reward of Rs.1,10,000 to Smt Laibi Oinam, a auto driver from Pangei who took the trouble to take the discharged girl from JNIMS covering 8 hours journey to Kamjong on midnight of May 31. She truly exemplifies hard work and “service above self.” pic.twitter.com/oFwgcx0Kyz

Acknowledging her heroic and kind gesture, Laibi Oinam was also rewarded with a cash prize of Rs. 1,10,000 on Thursday. Handed over to her by the Manipur chief minister N Biren Singh, and commended for her actions by several others like MLAs L Surindro (Yasikul), Th Satyabarta (Yaiskul) and H Dingo (Sekmai) who were also present during the felicitation, the woman was praised for being selfless and rightfully so.

The CM’s secretary also said, “The cash reward was sponsored by some entrepreneurs from Manipur along with the Diaspora in US, UK, Canada and Singapore as an encouragement for her humane and heroic act and service,” and it really was. At at time when no one could bother for anyone, scared that they might their own lives may be at risk, this woman drove through the night to help another person and this is the kind of humanity we can all get inspired by.