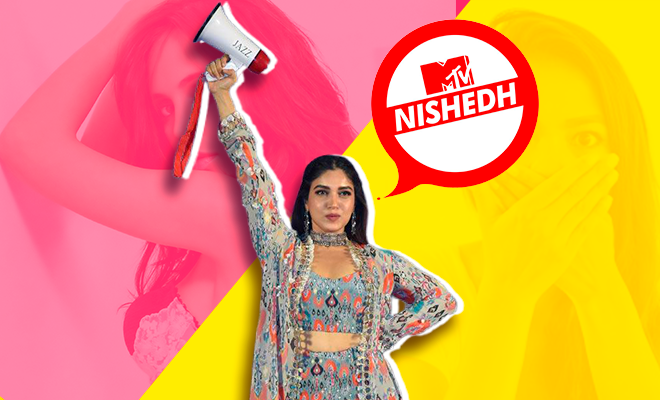 A Show On Indian Television That Talks About Sex And Other Taboos? Yes Please!

This is the best time to be single and I really mean it. We have so many online video streaming platforms and at this point, they may have replaced my desire to have a partner. There is more content to consume and limited number of hours you can actually dedicate to being glued to a screen. But driving my loneliness away is not the biggest motivation behind my dedicated video viewing time. Since we live in a country which has a long scroll down menu of all things taboo, it’s rare to find something that appeals to us open-minded millennials. Sure, sometimes just for sheer amusement, we may watch an episode of Bigg Boss on TV on a drunken night, or as background noise while we devour the takeaway we picked up. We want content that is relatable or is at least talks about real issues and not pretend like they don’t exist. Which is why, when I heard of MTV Nishedh, a 13 episode series which will explore subjects such as abortion, consent, contraception, etc. I was excited.

After a very long time, I am actually interested in an Indian TV show and I know this sounds bad but blame the content! With an aim to educate and inform while also entertaining the audience, the show is giving voice to things long deemed as taboo. “Our research team went to the rural parts of States like Bihar, Uttar Pradesh and Rajasthan to come up with data, which showed that till date people are unaware of issues related to abortion, tuberculosis and healthy contraceptive measures,” said Georgia Arnold, executive director of the MTV Staying Alive Foundation, worldwide. That’s the foundation to be credited for this massive milestone event in the history of Indian television.

Recently, the second season of Sex Education came out and there are several web series out there that provide quality content. Lately, we’ve had several Bollywood movies scripted to break stereotypes and the stigma around several subjects, sex being on top of the list. But this movement made it to Indian television and thus, will have a wider reach. I feel millennials are already quite on it, but it’s the older generations and people in the smaller towns that this will reach where the conversations can at least start. Which is why, that broadcasting on TV, is more relevant in India.

Bhumi Pednekar has joined in as the Cause Ambassador and also opened up about the show. “Gender parity is one topic that’s significant to me. I am glad to be working in times where similar opportunities have opened up for both male and female actors and I hope this spills over to the society as well,” Bhumi told IANS. She further added, “I am sure this show will help trigger more acceptance towards gender equality.”

MTV Nishedh will air on MTV from 25th January and on Colors Rishtey starting 1st February. The show will also be available on Voot.