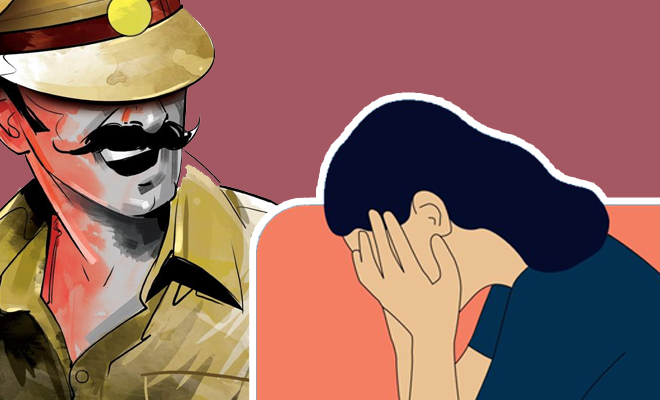 A Cop In UP Masturbated At A Woman Inside A Police Station. Where Are Women Safe Now?

Our society is built on a few rules – these aren’t law, just a common system we gingerly place our faith in. We believe these to be truths. One of them is that the the police force is fair, just and capable of ensuring that the public doesn’t break any of the laws stated in our constitution. However, in reality, only a handful of cops stand by the book and not abuse their power. The brutal custodial deaths of Jayaraj and Fenix are proof that police brutality is as much a reality in India as it is in the USA. It is also the reason that everyone is outraged at our police force at the moment.

The police are supposed to be protectors and not perpetrators. The incident I want to talk about today is nowhere as heinous and brutal as the murders of Jayaraj and his son but it needs to be talked about. You know, just this morning, I wrote about a story that was about a man who flashed and masturbated at a woman, on the road. While writing it, I thought to myself, ‘The police should throw him jail, at least there will be one less pervert on the street.’ Little did I know that there are a few police officers who are not very far behind when it comes to perverse, creepy behaviour.

Also Read: A Man In Bengaluru Flashed And Masturbated In Front Of A Woman On The Road In Broad Daylight. This Is So Disgusting

The woman alleges that the SHO was touching his privates in front of her when she went into his chambers to lodge a complaint. Though the timelines are blurry and the details are convoluted, reports say that she was there with her daughter in regards to a land dispute. The woman had been going to the police station quite frequently to lodge her complaint.

According to reports, she secretly filmed her meeting with the SHO with her hidden camera after she was fed up with the indecent and obscene behaviour. The woman complainant said, “I ignored his misbehaviour for the first 2-3 times and wanted him to lodge our case in the land dispute. But then a woman relative said that she also faced a similar incident at the hands of this officer. This is when I decided to film him.”

The SHO has been charged with voyeurism, which is an unlawful act intended to outrage the modesty of a woman and also of public servant disobeying the law.

This is a new low.

In Mumbai, Autorickshaw Driver Masturbates At A College Girl While Driving. This Is Absolutely Disgusting