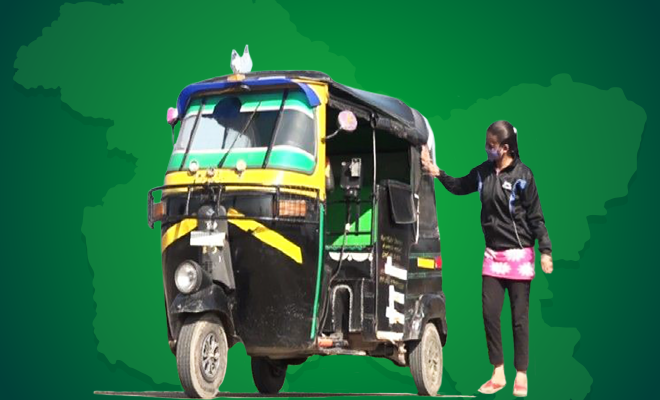 There used to be a time, when being the daughter of a house meant only to assist in the kitchen, to study up until you’d get married and then be sent off to another house. Where as the sons are considered to follow into the footsteps of the father and become the breadwinners of the family. But things aren’t the same anymore. Women have been breaking past these gender stereotypes and emerging as equals within the family, as the daughters step up to support the family. Just like 21 year old Banjeet Kaur from Kashmir who is driving an auto rickshaw with her father to help earn a living for her family.

Hailing from the Udhampur district of Jammu and Kashmir, Banjeet Kaur is a 21-year-old girl smashing patriarchy like a boss as she drives an auto-rickshaw along with her father to support the family in earning a decent living. She says, “My father was a school bus driver but he lost his job as the schools remain closed due to COVID-19. He started driving auto-rickshaw but he was not able to earn sufficient. So I stepped-in.”

She continued to share that driving the rickshaw is a part-time job for her, and what she really wants is to study further and go into defense. Yet, not shying away from the responsibility she said, “I am a second-year student and driving auto-rickshaw is like a part-time job.”

Also Read : This 90 Year Old Japanese Grandmother Holds A World Record For Being The Oldest Gamer In The World. We Love Her Spirit

#UDHAMPUR | Breaking the stereotypes, 21-year-old Banjeet Kaur from Udhampur district of Jammu and Kashmir is driving an auto-rickshaw to help her father to earn livinghttps://t.co/lspjDNGvsZ

Adding how girls must always be equipped in every situation she is of the belief that, “We girls should be ready for every situation.” And, we agree. Her sister Davinder Kaur is proud of Banjeet as she steps up in the need of the hour. Their father, Sardar Gorakh Singh said, “The girls can excel in every field. They can choose their profession depending on their will.”

He went on to further say, “After I lost my job during the lockdown, my daughters asked me to teach them to drive auto-rickshaw. I supported them.” What more could one ask of their daughters, who were willing to contribute to the family in every possible way.

Meanwhile, Rachana Sharma, Assistant Regional Transport Officer (ARTO) also commended Banjeet as she shared, “Girls like Banjeet Kaur, who is driving auto-rickshaw to support her father, is an example for society. When I was transferred as ARTO at Udhampur, I started a campaign called ‘Girls can drive’ under which several girls were trained to drive.”

Also Read : A 62-Year-Old Woman From Gujarat Started Her Dairy At Home And Has Sold Milk Worth Rs 1 Crore In The Last Year