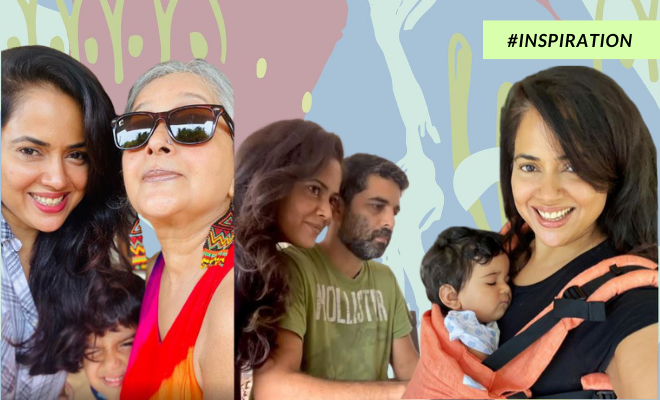 #Inspiration: Sameera Reddy’s Instagram Is Full Of Body Positivity, Adorable Kids And Cooking With Her Sassy Mother-In-Law. We’re Living For This Wholesome Content

Four months into the lockdown and I’ve reached that phase where instead of doing something productive like reading or watching a new show, I aimlessly scroll through Instagram until obscene hours of the night. And even that doesn’t bring me much joy, unless it’s memes, pet videos or Chef Kobe’s cooking (That kid has my heart!). On one such blah night recently, I came across one of actress Sameera Reddy’s IGTV videos. At first, I thought it was just another one of those workout videos that celebrities have been posting, but the friend who shared it said that the video was about body positivity and it made her day. So I decided to click on it and watch the whole video….

That’s it, I am crowning Sameera Reddy as the Quarantine Content Queen! (Second one; the first is Chrissy Teigen.)

If you’re wondering why I’ve suddenly become such a jabra fan of hers, then I suggest you watch her most recent IGTV video. In it, the Maine Dil Tujhko Diya actress is dressed in her workout clothes, the greys in her hair on prominent display because of some deliberate partitioning, and a rather unflattering camera angle that most actress/influencers wouldn’t touch with a ten feet pole. Now, this isn’t just my acute analysis because I want to mock her; these are things she pointed out herself!

Why? Well, the mother of two wanted to make a heartfelt appeal to her followers about self-acceptance. One of her followers, also a new mother, had written to her that she felt ‘ugly’ and didn’t like her body. And Sameera decided to showcase how her own body was not ‘perfect’ as per the lofty beauty standards we often set for women! She had the flab, her skin was acting up, she had grey hair—a problem that she revealed she has had since her 20s! And the best part? She wasn’t trying to hide it at all!

Also Read: #Inspiration: Tisca Chopra Is Writing A Book On Menstrual Health. We Need More Such Books For Young Girls

Now if you, like me, don’t really follow her and this is the first time you’re checking out her content, you’ll also think what I thought then. Okay, maybe this is a one-off thing. A lot of influencers do this where they talk about their body issues and then it’s back to glam for them from the very next post. But one look at her feed and I realised that wasn’t the case.

Her Instagram profile is full of some adorable moments of her life. There are pictures with her children—her son Hans (5) and her daughter Nyra (1)—and her husband, Akshai Varde, which will make you go “Awww!”

But what I loved looking at the most was Sameera’s shenanigans with her equally zesty mother-in-law. Sameera legit has an IGTV series called ‘Messy Mama & Sassy Saasu’, where she and her MIL try out amazing recipes of all kinds, with the kids popping up often in the background! It’s unlike the usual run-of-the-mill cooking videos because sometimes the two women even do a cook-off trying different versions of the same dish—From eggs to enchiladas to Goan fish and Sol Kadhi!

More than the food, I think it is their dynamic and banter that does it for me. After Indian Matchmaking’s Preeti as a MIL, this feels so reassuring! Daughters-in-law and mothers-in-law don’t always have to be at loggerheads! They can actually have fun and even miss each other when apart!

Speaking of loggerheads, that’s something you’d often expect siblings to be, especially when they belong to competitive industries like fashion and entertainment. We all know the Reddy sisters—Meghna, Sushma and Sameera—are actors and models, and were often compared a lot. Sameera has revealed in earlier interviews about how she was often considered conscious of being labelled the least beautiful of them until her late teens, and the comparisons only got worse when she entered the industry. But that was all in the past! Look at them now!

There has been a crazy influx of content during this lockdown period, with almost everyone coming up with something or the other to talk about. But Sameera Reddy’s Instagram felt like a nice, warm, ray of sunshine that would uplift your spirits. I mean, it’s got everything—cute kids, food recipes, humour and most importantly lots of positivity and self-acceptance.

What’s more, her videos aren’t preachy, like she’s speaking from a place of privilege of being a celebrity or a social influencer. She talks casually, with those Indianisms galore, like a friend would be talking to you!

Being an actress, it is probably harder to flaunt your flaws and own them like a boss. And Sameera doesn’t just do that, she also motivates and encourages other women. The videos don’t look phoney or staged, like this one here, where the actress is actually dying her hair on camera while her daughter takes a nap! She delves into some real talk about how she was so conscious about greys when she was young, and how if she could, she would’ve told her 20 something self to not give it so much thought! Watch it till the end for a heart-melting treat!

The world is such a negative place right now. Everywhere you look, people are either berating, bullying or trolling each other; there’s disease and despair, and a shadow of dread over every little joy. Amidst all this, we need more content creators like Sameera Reddy to brighten up our day! It’s called being a responsible social media influencer, who doesn’t just churn out content for the heck of it but also empathises with her audience and helps them.

I am a little disappointed that I hadn’t discovered her account sooner! So Sameera, if you’re reading this, keep doing what you’re doing (with your Mom-in-law)! You make us feel really good about ourselves!