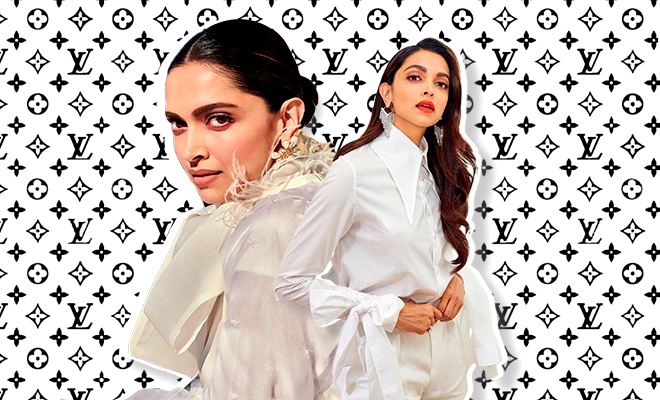 Deepika Padukone has been collecting a lot of feathers for her fashionable hat in the past couple of years. She is consistently featured in ‘Best Dressed’ lists coming out of international red carpets. Her artist features in magazines make for a well thought out center spread, giving global audiences a taste of an Indian celebrity. She single-handedly created a trend of red floral lehengas with her wedding outfit and dominates the trendsetting space of celeb fashion at home. She’s an unstoppable tour de force, if you may!

Ticking off yet another milestone off her checklist, Deepika became the first Bollywood actor to be featured in a luxury label’s campaign, starring in Louis Vuitton’s pre-fall 2020 campaign. Established in 1854, LV has largely remained as one of the most influential labels in the industry, maintaining its untouchable status through thick and thin. As such, being one of 24 global celebrities to star in the campaign is a game-changer for India’s representation worldwide.

ALSO READ: Priyanka Chopra Talks About Changing The Game When It Comes To Portrayal Of Indians In Hollywood And We Want Her To Win

Creative director Nicolas Ghesquière’s vision for the campaign looks like a collection of horror film posters from the pulp noir genre. Confused? Just imagine a very cheesy horror flick with a haunted mansion and a damsel in distress, who later turns out to be badass kick-boxer who needs no saving, and you have your winner! Deepika stars in the one written by American crime fiction novelist Michelle Gagnon, titled ‘Don’t Turn Around’. Decked out in signature LV, the checkered dress, overcoat, belt bag, and quilted boots give her the air of a woman in a mission and we are left charmed!

Deepika joins the list of high-profile, yet fresh faces as part of the campaign, among which is also India’s favourite sister-in-law Sophie Turner. Other people featured in the campaign include Léa Seydoux, Alicia Vikander, Chloë Grace Moretz, Cody Fern, and Jaden Smith, to name a few. The inclusion of a major Bollywood celebrity in one of the most aspirational brands indicates the growing intrigue of global fashion in the Indian market. With India’s top players like Reliance Brands aiming to make luxury shopping more accessible to Indian shoppers, we aren’t surprised by the growing interest in our stars.

ALSO READ: Deepika Padukone Gets Awarded For Her Contribution Towards Mental Health Awareness. And She Walks The Talk

Check out the quirky campaign shots from the campaign above!