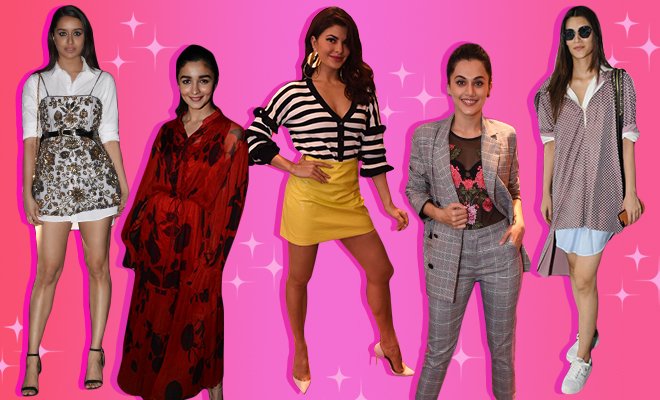 Another week has gone by, and TBH, we don’t really think that fashion in B-town ever sleeps. Besides the two big events of the week with GQ and Vogue, these actresses stepped up their fashion game with various other ensembles.

Judwaa 2 promotions brought a whole lot of Jacqueline and Taapsee to the centre stage — and both of them pretty much dressed to perfection. We are crushing on how amazingly awesome both of them were, rocking the pant suit with so much power!

Besides that, Sonam Kapoor’s airport style is making us feel stylishly relaxed — the loose silhouette, the breezy appearance, they’re both perfect for travel.

Also how cute does Alia Bhatt look in that maxi? Don’t you think she looks fab!

Scroll down to see who made it to our #StyleSpots of the week! You’ll really be surprised with all the looks they are striking a pose in.

Saiyami Kher in a The Pretty Dress

Karisma Kapoor in a YSL dress

Sonam Kapoor in a Bhane top

Shilpa Shetty in Lola by Suman B