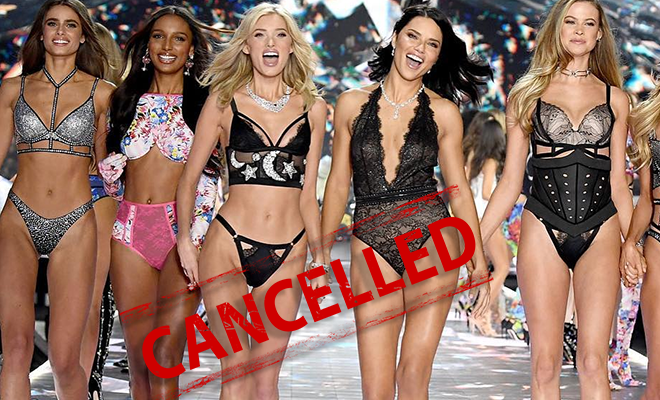 You Heard It On Hauterfly First! The Victoria’s Secret Fashion Show Has Officially Been Cancelled.

It is the end of an era! The Victoria’s Secret Fashion Show has been officially cancelled and won’t just be not be televised, but also, not happen at all. The brand has cancelled the broadcast of its famed annual show. Till last year, the event managed to rope in the biggest names to perform and walk for them.

Les Wexner, the CEO of L Brands which owns Victoria’s Secret, apparently wrote, “Fashion is a business of change. We must evolve and change to grow. With that in mind, we have decided to re-think the traditional Victoria’s Secret Fashion Show. Going forward we don’t believe network television is the right fit. In 2019 and beyond, we’re focusing on developing exciting and dynamic content and a new kind of event—delivered to our customers on platforms that she’s glued to… and in ways that will push the boundaries of fashion in the global digital age.” But as Lejuez said, these changes are “may be too little too late.”

We can indeed say that we aren’t surprised. The brand has been in hot water with a lot of people for a while. They have been suffering from weak sales. Combined with recent controversies, it does seem like their mighty reign is over. Their overly sexualised brand image and lack of inclusivity do not belong in the #MeToo era and it’s running out of time.

In a recent CNN report, it was revealed that fewer people are buying the brand’s bras and panties. The fall in sales has affected their stock rating and was named as one of the worst-performing retailers on the S&P 500. The glitter and glamour of the brand’s popular spokespersons and shows were not enough to mask it’ shortcomings and we think it’s about time they owned up to it.

Talking about the failing business model of the brand, a Citigroup analyst, Paul Lejuez, commented that the brand has been “slow to implement meaningful change”. This has led customers to choose their competitors who focus on inclusivity and advertise comfort over sex appeal. This is in addition to the company’s execs touting trans-phobic sentiments and former models accusing the brand of misconduct. Supermodel Karlie Kloss quit her association with the brand saying, “The reason I decided to stop working with Victoria’s Secret was I didn’t feel it was an image that was truly reflective of who I am and the kind of message I want to send to young women around the world about what it means to be beautiful,”, she revealed.

ALSO READ: Tanushree Dutta’s Short Film On #MeToo Is All The ‘Inspiration’ You Need

Beyond the bad sales and generally bad reputation, the brand has also been accused of plagiarism. A major appeal of Victoria’s Secret was the cute and innovative designs. Turns out, that these might also be not genuine as their line has been accused to rip off Fleur du Mal, another customer fave. It was revealed that VS purchased bulk orders from Fleur du Mal and then ripped them off for their own collection. And there are receipts!

Can the brand really come out of this in a good light? We might not know!

Update: While the brand was working towards finding other ways to showcasing their eponymous fashion show, considering the fall in ratings, it has officially been cancelled.

ALSO READ: Rihanna Threw So Much Shade At Victoria’s Secret With Her Savage X Fenty Show. This Was A Lingerie Showcase Unlike Anything Else!