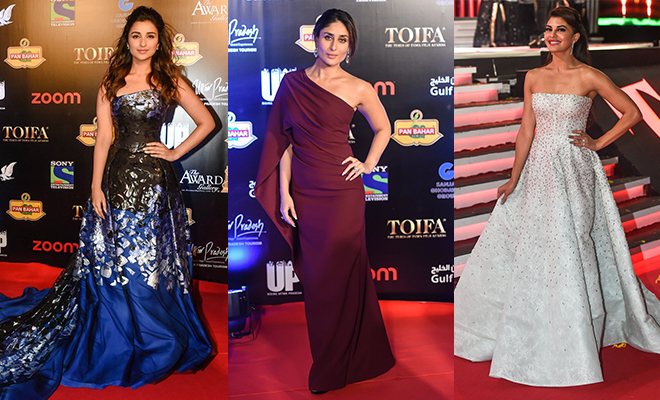 The Only Looks You Need To See From TOIFA 2016!

Just as we thought awards season was officially over, the stars took to the red carpet at TOIFA 2016 in Dubai only to make it a great hit. There’s no doubt that award shows help gauge a star’s style credentials. While you have some celebrities who are constant when it comes to showcasing their best looks, there are some who completely miss the plot and a few new faces who show you how red carpet style is done (or not). Here’s our list of the best-dressed celebrities who took to TOIFA 2016’s red carpet. Read on!


It’s been a while that we’ve seen Bebo grace the red carpet. But she’s been giving us the style star feels thanks to her appearances at events, promotions and even off-duty looks. And there’s no doubt that Kareena is a headturner. At this event, the actress switched things up a notch by wearing a rich burgundy hue. In a one-shouldered gown by Monisha Jaising that she teamed up with Nirav Modi jewels, Kareena looked stunning. Yes, we’ve seen her in an ultra-feminine and flowy avatar before. But everything from the outfit to accessories and even the updo spelled classic.

I’ve always been a fan of Jacqueline’s fun sartorial sensibilities. And before you say that it’s the stylist that makes the look, I’ll counter-argue that it’s how one carries a particular look that makes or breaks it. Jacqueline never disappoints when it comes to pulling off an ensemble. Styled by Shehlaa Khan, the actress wore an icy-blue Rami Kadi gown with Nirav Modi jewellery and Louboutins. The pailettes that adorned her gown seriously added to her Cinderella moment.

We’re almost always up for a good style deviation here at Hauterfly. And that’s also why Ranveer Singh is a favourite. He usually rakes up the charts with his novel looks, giving all the men we know some serious style goals. Ranveer opted for a blue tux with black accents. He teamed his look with a black bow tie and pants of the same hue. Dapper much? Oh yeah!

I’m loving Parineeti’s style evolution over the past few months. Seriously, she’s singlehandedly climbed the ladder with her sartorial choices, so much so that she’s been frequenting our posts so often. It IS impressive. Here, styled by Sanjana Batra, Parineeti opts for a hand-painted blue and black ombré gown by Gorges Chakra that she teamed with Argentum Jewels. I like that she went sans a neckpiece for this look. Also, the hair and make-up were in sync.

In a sea of gowns, Karisma Kapoor worked a desi avatar and stood out in a Sabyasachi sari that she paired with jewellery from Amrapali. There’s just no quib with the styling by Tanya Ghavri here. In fact, it’s commendable. Does anyone else feel she’s giving off serious royal vibes, thanks to her hair, makeup, et al?

I like it when a man defies the rules and still manages to look good. And that’s what Salman Khan’s look on the red carpet is usually about. Talk about nonchalance; he manages to skip the tie, the tux, and even the bow tie for a look that’s so him, and still emerges a winner. Here, he’s seen in a black pant suit with a violet shirt.

Ok boys, if you ever have to take a page from someone’s style handbook, it’s got to be Anil Kapoor’s. Like seriously, does this man even age? Wearing a perfectly-tailored pant suit that he teamed with a checkered tie, he is among the best dressed men for the evening. How dapper!

Has anyone ever noticed that singer Kanika Kapoor’s off-duty style has always been darn fine? Seriously, she’s giving many a run for their money. For TOIFA, Kanika aced her style game wearing a Jenny Packham gown. She checked all the boxes with her perfectly touselled side-swept hair and well-done makeup.

In a purple gown, Nora worked both sheer and shimmer on the TOIFA red carpet last night. She fared well.

Wearing a Manish Malhotra bandhgala, Kartik Aryan swayed from the standard dress code as seen on the men at the TOIFA red carpet this year. That pocket square accessorised perfectly with the outfit. Talk about styling details done right!