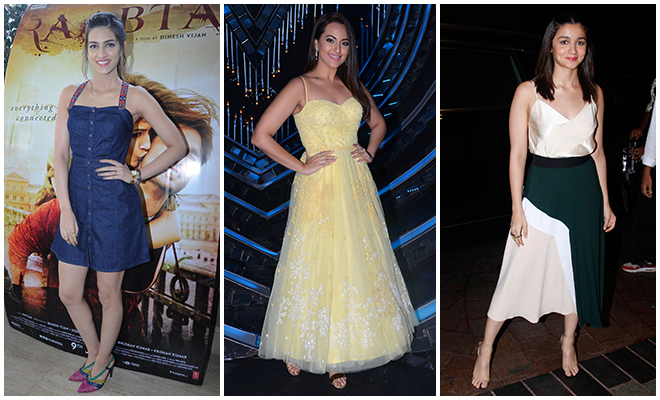 It was celebrity galore this past week, and our divas didn’t shy away from giving us those oooohs and aaahs.

Spotted a whole lot this week was Kriti Sanon, who was out and about promoting her upcoming film Raabta. Choosing a variety of styles, this week she went from boho-chic casual in a Zara jumpsuit, to retro glam in a velvet ensemble and Outhouse jewellery.

This week was also all about showing off legs — I mean, Priyanka Chopra did set the bar pretty high, after her rebuttal post those memes (yeah, we’re talking about how people reacted to what she wore to meet the PM in Berlin).

Besides that, we saw Shilpa Shetty, Kriti Sanon, Kiara Advani, and Katrina Kaif shoot those long legs out in dresses, shorts…the works!

Flowy dhoti pants also seemed to be a thing this week, maybe because of the transition of seasons we’re currently going through? Pooja Batra and Manisha Koirala chose to go the dhoti way.

Scroll down to see who made it to our #StyleSpots of the week! Do let us know in the comments below which celebrity’s style inspires you the most!

Esha Gupta in a Mahima Mahajan outfit and Amrapali jewellery

Kriti Sanon in a Purple Paisley outfit and Outhouse jewellery

Twinkle Khanna in a Zara dress

Kriti Sanon in a Zara jumpsuit

Kalki Koechlin in a Shift by Nimish Shah dress

Kiara Advani in a Self-Portrait dress

Katrina Kaif in a Balmain dress and Louboutin shoes

Alia Bhatt in a Prabal Gurung outfit and Intoto shoes