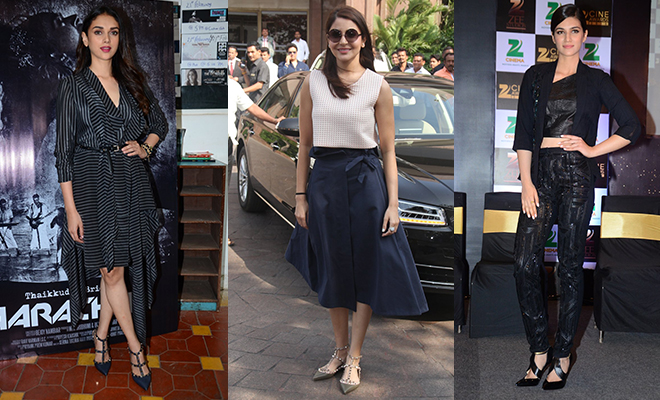 We loved the looks Bollywood celebrities doled out this time around. From Sonam Kapoor’s desi vibes to some monochrome airport looks that ranged from casual like that of Kriti Sanon and Shilpa Shetty, and business-y such as Huma Qureshi’s, this was clearly a great week for celebrity style. While Jacqueline Fernandez and Pernia Qureshi worked sheer, Kareena Kapoor Khan and Esha Gupta’s sartorial leanings were toward the maxi skirt. Keep scrolling to know if your favourite celebrity made it on this week’s style charts.

Esha Gupta was spotted at the Aligarh screening wearing a Zara t-shirt and a Temperley London skirt.

For the Bazaar Bride anniversary, Sonal Chauhan was seen in a sheer crop top and skirt by Amritraj Bora.

Pernia Qureshi was seen at the Bazaar Bride anniversary in a Manika Nanda outfit.

Sonam Kapoor was spotted in a P.E.L.L.A. maxi and Suhani Pittie neckpiece.

Sophie Choudhry in an outfit by Sandro Paris and Gucci shoes.

Huma Qureshi in a Dolly J dress and jewellery by Swarovski and Micare. She’s completed her look with a Furla handbag and Zara shoes.

Kriti Sanon in a checked shirt, black denims and a pair of sneakers at the airport.

For a video launch, Jacqueline Fernandez was spotted in a Rhea Pillai Rastogi. She accessorised wearing a Suhani Pittie necklace, ring from Notandas and Christian Louboutin heels.

Dressed in a Valentino couture ensemble, Pernia Qureshi was spotted at a Mumbai event. She wore Armani Privé pumps.

Shilpa Shetty was spotted at the airport in ripped denims, a black tank top, striped jacket and nude sneakers.