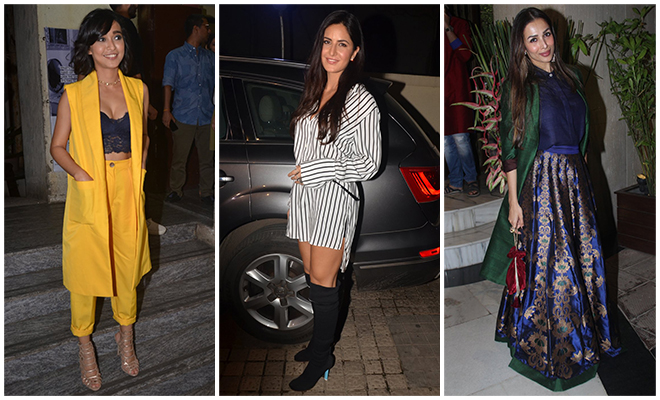 It’s that time of the week again and, as usual, we’ve found ourselves drowning in celebs whose style is on fleek. When it comes to fashion, these stars never fail to impress us — it’s like they constantly have their style game on point. Where Katrina Kaif brought on a couple of great casual looks during her Baar Baar Dekho promotions, Sonam Kapoor made dressing for the airport look effortless. And let’s not forget, since the festivities have begun, we saw a great number of Indian ethnic ensembles for Ganpati celebrations this week. There was also a sudden surge of jumpsuits with Amy Jackson, Tamannaah Bhatia, and Preity Zinta pulling off the one-piece seamlessly. Definitely keeping up with the trend, Sayani Gupta paired her yellow culottes with a waistcoat of the same colour, and it’s got our approval.

Scroll down to check out who made it to our style list this week.

Jacqueline Fernandez in a Miuniku dress and a Fendi shoulder bag.

Prachi Desai in a Masaba ensemble.

Tamannaah Bhatia in a Rozina jumpsuit.

Katrina Kaif in a McQ shirt and Public Desire boots.

Preity Zinta in a Surily jumpsuit.

Aditi Rao Hydari in a Sukriti and Aakriti lehenga and Amrapali earrings.

Kriti Sanon in a Sukriti and Aakriti maxi dress.

Katrina Kaif in a Label by Ritu Kumar dress.