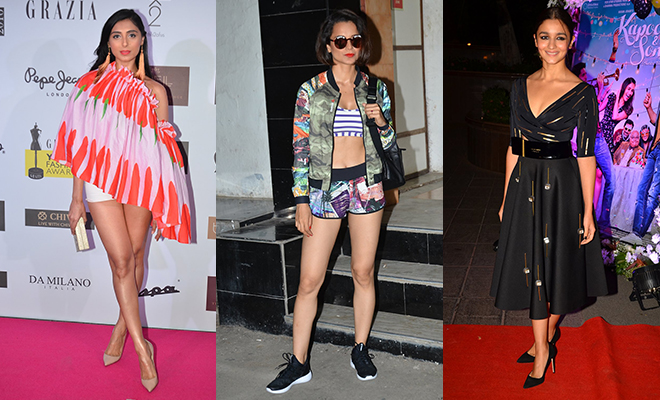 I’ve got to mention that it’s been a great week in style thanks to events like Lakme Fashion Week Summer Resort 2016 and Grazia’s Young Fashion Awards 2016. Not only did we get to see some fresh-off-the-runway looks on A-listers (Alia Bhatt in a Shivan & Narresh dress, Athiya Shetty in Nikhil Thampi and Amrita Puri in Poco & Jacky), we also saw some great styling this week. While Kangana stuck to the athleisure trend with Reebok separates, Parineeti Chopra gave us an adorable girly look in a custom-made Nishka Lulla outfit. Here’s a look at who wore what this week.

Kangana Ranaut in Reebok separates and House Of Holland sunglasses.

Neha Dhupia in an ensemble by Chola.

Pernia Qureshi in a Masaba outfit.

Kalki Koechlin in an outfit by Nishka Lulla.

Taapsee Pannu in a dress by Urvashi Joneja.

Malaika Arora Khan in a dress by Poem and jewellery by Viange.

Monica Dogra in an outfit by ILK.

Esha Gupta at the airport in a Lola By Suman B jumpsuit.

Amrita Puri in a dress by Poco & Jacky.

Sonakshi Sinha in a jumpsuit by Verandah.