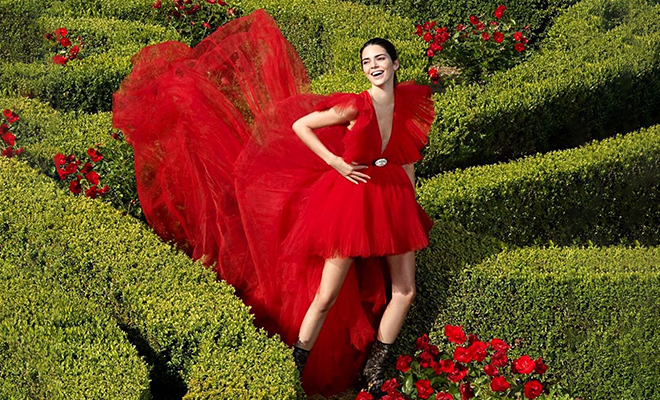 What happens when two completely opposite fashion forces come together? Something quite extraordinary, of course. The unlikely collaboration between fast-fashion giant H&M and designer Giambattista Valli, synonymous for his show-stopping gowns, is certainly proof of it.

Expect exaggerated sleeves, ruffles, lace and some fabulous, frothy feminine fashion to hit the high street as the Italian couturier pulls out all stops to reach a larger Gen Z audience, who will eagerly line up outside H&M to grab the collection as soon as it hits the floor. You might have already caught a glimpse of the luxe line when Giambattista Valli partnered with Kendall Jenner, Chiara Ferragani and H.E.R to show off some tulle concoctions from his limited edition drop, at the Cannes Film Festival earlier this year.

But that was just a tiny sneak peek of what’s to come. The collection was unveiled on the runway at Giambattista Valli x H&M’s recently concluded show in Rome’s stunning Palazzo Doria Pamphilj. Aside from the star-studded models (read: Kendall Jenner, Anok Yai and Grace Elizabeth), Giambattista Valli’s tulle tutus, frill adorned jumpers and trendy, exuberant gowns didn’t disappoint either. They appeared in as many dramatic iterations as conceivable, with fascinators adding a dash of old-world sophistication.  Jenner’s two major tulle dresses, a short pink and a long red, were the cream of the crop.

The complete Giambattista Valli x H&M collection will be available on November 7 at select stores across the world. Each piece is woven with his signature romantic touch, and you can expect to find red-carpet worthy tulle dresses, accessories, jaw-dropping jackets, printed suits and glamorous tuxedos. So if you’ve always been a Valli fan, admiring his creations from afar, this is your chance to get a first-hand flavor of what the fuss is all about.