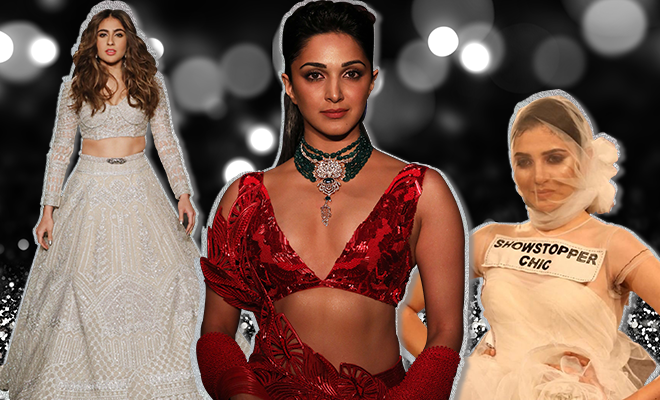 There are many milestones that define a young celebrity’s career. One of the big ones is to walk for a big designer at fashion weeks. The runway debut of an up and coming celebrity becomes big news, sometimes even bigger than the show they are a part of. Janhvi Kapoor’s knockout debut way back in 2018 made the headlines, eclipsing the charm of Nachiket Barve’s Millennial Maharani collection. It is definitely a value addition to get a popular celebrity to wrap up your show. It gets the attention of people outside the industry as well. But at what cost?

The sentiment of a celebrity showstopper sometimes being a distraction was expressed by ace designer Tarun Tahiliani at the India couture week 2019. Tahiliani, who is celebrating his 25th year in the industry, presented his collection Bloom for the grand finale, and boy was it grand!

According to the designer, “The collection captures the metamorphosis of the Indian bride with a synthesis of different cultures, a reflection of today’s generation. Bloom represents the delicate confluence of artistic traditions and the pragmatism of the times we live in. And of course, flowers,” he elaborated. It was indeed a sight to behold, one statement lehenga, glimmering with 100,000 exquisite Swarovski crystals encrusted in its floral appliqué embroidery. The grandeur had us spellbound but the show-stopping moment is one that will go down in runway history as totally badass!

While waiting for a big-name celeb to end the show, Tarun sent down a model in ruffled trims, face covered in gauze and slogans like ‘Show Stopper Chic’ and ‘The Show Stops After’ pasted on her. According to Diet Sabya, a page dedicated to calling out ‘fakes’ in the industry, this was a total power move. To shun the idea of a celeb showstopper so that people talk about the intricacies of a collection was a genius idea!

…and Kiara Advani for Amit Aggarwal:

Just some of the many!

We love the idea of Tahiliani using his stature to point out this indulgent habit in the Indian fashion industry. None of the international fashion weeks uses celeb show stoppers for their show, then why should we rely on the same? The slogan clad model did make us reminisce the birth of slogan chic…

Bow down to Viktor And Rolf, the OG kings of ‘Statement Chic’!