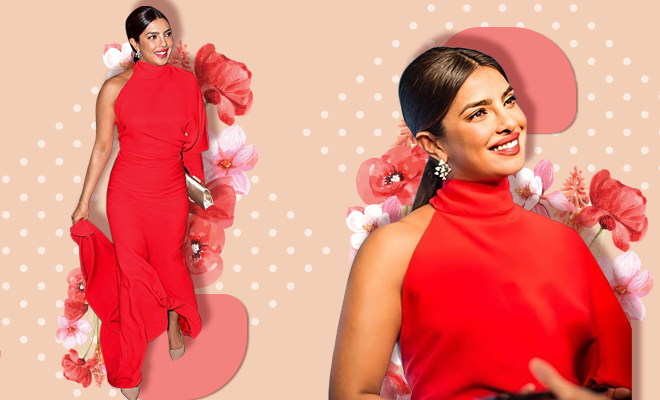 History belongs to great thinkers, great doers, and sometimes, even great orators! Priyanka Chopra Jonas is proof of how passionately spoken words can be more powerful than weapons in changing the world. Her acceptance speech at the 15th Annual UNICEF Snowflake Ball last night was so inspiring. Felicitated with the Danny Kaye Humanitarian Award by veteran fashion designer Diane von Furstenberg, Priyanka spoke about her journey with UNICEF and why it matters in today’s political climate.

Named after the American actor and musician Danny Kaye, the award honours an individual’s philanthropic achievements, responsible for impacting change in people’s lives. Priyanka herself has been associated with UNICEF for over a decade now and she has graciously doled out a speech at the ball that is winning hearts and applause, everywhere. We guess all that pageantry training, which won her the Miss World title in 2000, can be credited for her elegance and poise and we are so glad she is representing us at so many global events.

ALSO READ: Priyanka Chopra Talks About Changing The Game When It Comes To Portrayal Of Indians In Hollywood And We Want Her To Win

Priyanka was so humbled by the honour and shared, “I am in awe of the tireless efforts and unwavering commitment of the people who work for UNICEF. Thank you for allowing me to be part of this journey. To serve as your Goodwill Ambassador is the privilege of my life.” She also shared the story of how she came to associated with UNICEF, “I had just become an actor and I was figuring out that I had this platform. I had started associating with causes that I believed were important. I was working with thalassemic children, children’s wards and suddenly I realised that there was a theme that I was working with a lot of kids. My then manager Natasha Pal told me that there is this organisation called UNICEF and maybe I should volunteer. I started reading up a lot more and I started volunteering my time. A couple of years later, I became a national ambassador in India and then two years ago, I became a global ambassador for UNICEF. The journey has been now 13 years”.

Priyanka also made an impact with her fashion statement at the event. Dressed in a fiery red custom Ferragamo gown and minimal bling. PeeCee made sure to make the night about her words and not just fashion. Considering that the rest of the guests chose a more subdued theme for their ballgowns, the crimson shade on Priyanka is a touch of genius. It is exactly the kind of look you should be going for a philanthropic event, where you want all eyes, and ears, on you. The understated glamour of the gown is that it has a train because PeeCee just can’t do without one. She was perfectly styled with sleek center-parted hair and Parisian makeup. We love it!

ALSO READ: Priyanka Chopra Opens Up About How She Dealt With The Feeling Of Being Replaceable. And We All Need To Hear This!

On the work front, Priyanka is currently shooting for The White Tiger, an upcoming Netflix movie based on the best-selling book by the same name written by Aravind Adiga. We can’t wait for it to hit our screens!

Priyanka Chopra Is The Most Searched Indian Celebrity. So Salman, We’re Guessing It’s Okay That She Didn’t Do Bharat