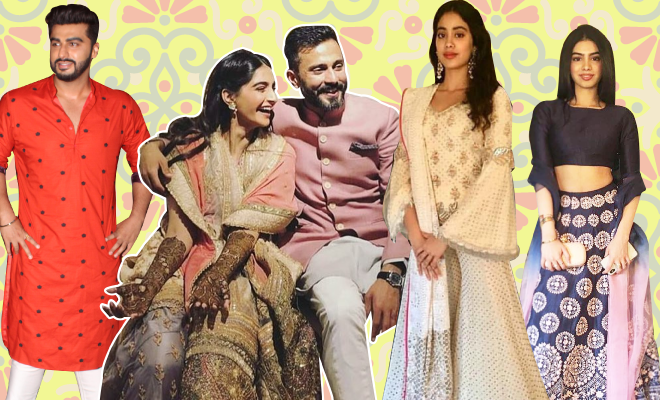 Every Single Look From Sonam Kapoor And Anand Ahuja’s Mehendi

And she finally found her Prince Charming! If you stalk Bollywood celebrities as much as I do then you already know that Sonam Kapoor is tying the knot with her long-term boyfriend Anand Ahuja. Sonam Kapoor and Anand Ahuja’s mehendi function was held yesterday, and it looked like a hell lot of the fun!

#SonamKiShaadi was everywhere and I could not stop stalking the hashtag, to catch up on all the fun, as well as all the outfits everyone was seen wearing. In case you missed seeing who-wore-what at her mehendi function, here is a look.

Since Sonam is the fashionista of Bollywood the expectations from her wedding trousseau are pretty high!

Kickstarting on a fab note, for her mehendi, she picked an Anuradha Vakil look. She wore a lavender, cream, and dusty pink sharara set for the event. The kurta was sleeveless, so she could wear her mehendi with much ease, and the sharara pants could easily be pulled up, so she could apply mehendi on her feet as well! She styled the look with simple makeup and big chaandbalis.

Later that evening, Sonam was also seen chilling in a pair of white PJs, which looked a lot like Christmas PJs! They had Santa Claus and Christmas trees and decorations on them. Cuteness overload!

Also, look at Sonam being a chill bride and wearing Nike slide under her desi look! LOVE IT!

Anand Ahuja in a pink and white look

To match the hues of dust pink in Sonam Kapoor’s look, Anand was seen wearing a dusty pink, Nehru jacket which has white buttons, along with a deep purple pocket square. Under the jacket, he wore a white kurta along with white pants. He wore his pink and white kurta with a simple black watch and black sandals.

The sister of the bride, Rhea Kapoor, is also Sonam Kapoor’s stylist and has quite an impeccable sense of style herself.  She was seen in a simple and elegant white outfit by Gulabo by Abu Jani and Sandeep Khosla. The theme of the night was Indian traditional whites! She styled her look with chaandbalis.

Sticking to the theme, Janhvi Kapoor too was seen wearing an ivory and dull gold sharara and kurta set by her trusted designer Manish Malhotra. The outfit consisted of flared sharara pants with a matching a kurta that has flared sleeves. The entire look had gold badla chikankari work on it, and she paired it with her hair left loose and long gold earrings.

The very young and stunning Khushi Kapoor was seen wearing a royal blue lehenga by Manish Malhotra. The lehenga was from his recent Mijwan collection. The royal blue lehenga has soft pink chikankari thread work on it and she styled it with an ombre chiffon dupatta.

The pretty Shanaya Kapoor kept things simple as she was seen wearing a pink kurta that had gotta work on the hem and the kurta was paired with matching pink sharara pants and a dupatta.

Karan Johar in an all-white look

Karan Johar brought drapes to the mehndi function. He was seen wearing a white kurta which has drapes on one side and medallion style brooch on the other.

Arjun Kapoor made a dapper appearance and was seen wearing a bright orange kurta by his friend and trusted designer Kunal Rawal. He styled the kurta with black shoes!

The brother of the bride, Harshwardhan Kapoor was seen wearing a grey Nehru jacket with a white kurta-pyjama set.

Rani Mukherjee in an all-white look

Wearing an all-white look, Rani attended the mehendi function too! She wore a laser-cut top and paired it with a pair of printed cigarette pants. Keeping the look monotone, she added a pair of white pumps and a white sling bag!

Looks like shararas and kurtas are a huge trend this wedding season. Well, now we cannot wait to see what everyone will be wearing at the wedding!

The mehendi was followed a big sangeet party and an intimate day wedding, the same evening the couple hosted a reception party that looked like hella fun! Check out all the sangeet and wedding looks here and the reception looks here!

Which look did you like the best? Let us know in the comments below.