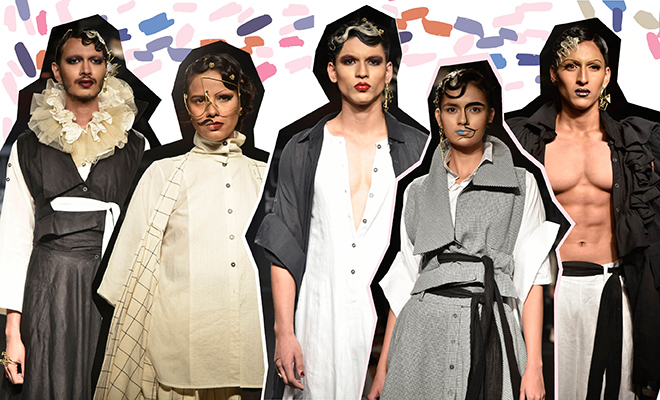 One of India’s most coveted celebrations , Lakme Fashion Week is back with its Winter Festive 2018-19 Showcase. While the first day was banging with many new and innovate trends showcased on the runway, Chola’s “Bye Felicia” show particularly stood out. The show had models and LGBTQ community activists dressed as drag queens, wearing Chola’s latest collection.

The clothes were paired with jewellery from Roma Narsinghani. The show had drag queen Mark Mascarenhas, makeup artist Jason Arnold, Mr. Gay World 2014 winner Sushant Divgikar, and Prateik Babbar as the showstopper. Prateik shaved half his face and wore his beard on one half to represent the drag community’s juxtaposition.

Chola’s head designer Sohaya Mishra’s latest offering sought solace in the grey territory, that symbolises the need to be able to express yourself when you’re not accepted. The models were seen walking the runway in clothes that were in the black, white and grey colour family, to represent the strength of coming out and being yourself. It reflects how Drag can be a creative outlet and a means of self-exploration. Asymmetrical deconstructed tops, paired with solid maxi skirts, exaggerated ruffled tops worn by men, flouncy skirts and classic prints like gingham, checks and stripes were the theme of the clothing.

The clothes were paired with quirky jewellery that included metal headgear deconstructed glasses, bobby pins, mini hair combs, earrings, hair barrettes, handcuffs, ear cuffs, brooches and epaulettes. The show was a smashing hit and everyone raved about the designer. Keep scrolling for a look at the show…

What did you guys think of this look, let us know in the comments below!