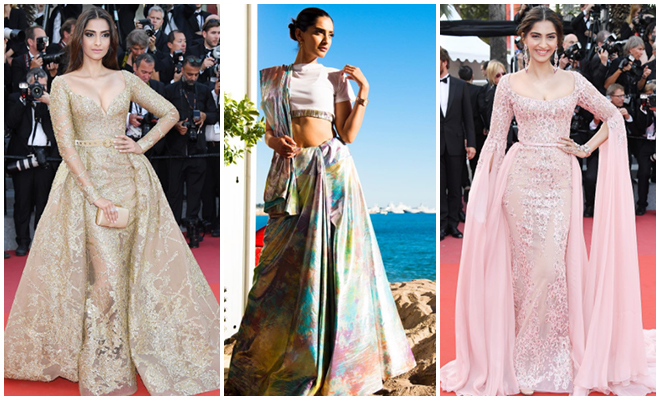 #Cannes2017: All Of Sonam Kapoor’s Looks At The French Riviera

Let’s start off by saying Sonam Kapoor confused the hell out of us this time around at The Cannes Film Festival 2017. And why are we saying this? Well, because she chose to do the opposite of what Deepika and Aishwarya did — while they kept their simpler looks for the day appearances, and went all out on the red-carpet, Sonam contrasted this.

Spotted wearing a Nor Black Nor White saree as one of her first looks, Sonam looked gorgeous against the background of the French Riviera, and we thought she’d take it up notch post that. But she didn’t quite do anything different, like she did in the past.

Wearing an Elie Saab shimmery rose-gold gown, she did look elegant and absolutely gorgeous, but it didn’t quite match-up to the standard she set for herself (and the bar Ash set on days 3 and 4). It was simple, subtle, and classy no doubt, but it wasn’t quite ‘Cannes’ worthy, don’t you think?

The next day, Sonam kicked off her looks with a drastically different ensemble by Anamika Khanna — which at this point, confused us even more. Wearing a 2-piece ensemble, a jacket and a turban, for a photoshoot on the beach, this look stood out the most from the other minimalistic ones.

ALSO READ: #Cannes2017: Sonam Kapoor Shows You How To Do Rose Gold The Right Way

She ended her red-carpet appearances with a similar Elie Saab gown, just in a different colour…but why Sonam? We loved your first day look, but that doesn’t mean you had to wear its twin, right?

Compared to the rest of the Bollywood divas, Sonam Kapoor’s Cannes style wasn’t AS effective as it usually is. Oh well, that doesn’t take away from the fact that she did look gorgeous, as always!

Scroll down to see a roundup of all her looks at The Cannes Film Festival 2017.

In a Rheson top and bag, and Ellery pants

In a Nor Black Nor White saree and Lynn Bann jewellery

In an Elie Saab gown and Kalyan Jewelers jewellery

In a Masaba trouser sari and Suhani Pittie earrings