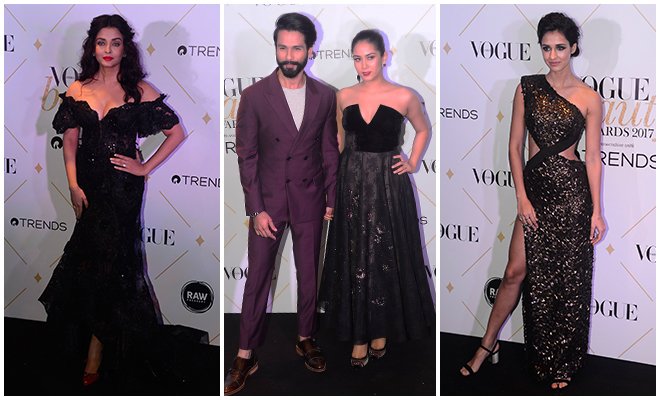 Going by the magazine’s 10th year anniversary in India, and Reliance Trends’ upcoming collection, the evening was all about shine and shimmer.

The red carpet saw a whole lot of familiar faces from the industry, including Bollywood’s most-loved family, the Bachchans.

Let’s begin with the most stunning of the evening, Aishwarya Rai Bachchan, who entered in a black Nedret Taciroglu ruffled gown.

Keeping it within the family were the 3 generations of Bachchan women, Jaya, Shweta, and Navya Naveli, who wore Abu Jani Sandeep Khosla, Moschino, and Monisha Jaising, respectively.

Of course, accompanying them was the evergreen Amitabh Bachchan who looked equally dashing.

Some of the award titles included Aishwarya’s Global Icon, Akshay Kumar Most Beautiful Man Of The Decade, and Shahid & Mira Kapoor’s Most Beautiful Couple. It’s all in the family and the industry.

Scroll down to check out all the best-dressed celebrities in attendance at the Vogue Beauty Awards, 2017, and don’t forget to tell us in the comments below who makes it to your list of favourites.

Pernia Qureshi in her own label