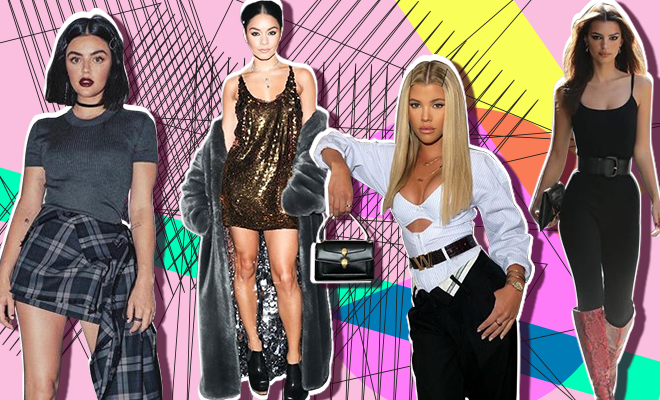 New York Fashion Week is in its last phase for this season, and let’s get real, it’s not just the catwalk shows that we have our eyes fixated on, but all the celebrities who are sitting pretty at the coveted front row (and making their presence felt at the champagne-laden after-parties). From sheer dresses, corset tops to bucket hats and animal-print boots, the A-listers have come out all guns blazing to support their favourite designers and we are taking some major style inspo from them. Here’s taking a look at the ones that caught our eye.

At the Self Portrait show, Brittany Snow commanded attention in this print-on-print skater dress with a lace hemline, subtle yet sexy. Brownie points for accessorising the look with azure heels and a sleek chignon.

Lucy Hale was serving up some serious grunge at Vera Wang’s comeback show after a sabbatical of 2 years. The actress rocked a plaid skirt with ankle-length suede boots that we just can’t take our eyes off of.

No one does androgynous fashion quite like Miley Cyrus. The singer went for an all-black ensemble at designer Tom Ford’s show, who has also been ratified as chairman of the CFDA. Cyrus wasn’t afraid to mix things up, with a pair of black leather pants, a longline suede jacket, topped off with a furry hat that was all kinds of cool.

Black seems to be the colour of choice at NYFW with a lot of celebrities rocking the moody shade. Another star to follow the trend was model, Lily Aldridge. Keeping the look very minimal, Aldridge rocked a black Brandon Maxwell dress that she paired with a belt and loose, soft waves.

Another star sported at Vera Wang’s show was Vanessa Hudgens. Wearing a sparkly slip dress, the star accessorised the look with a long fluffy coat that looks soft as heck. We want to get one too!

This is hands down one of our favourite looks from the front row. Spotted at the Kate Spade show, Anna Kendrick stole everyone’s thunder in this super chic midi leather dress paired with patent-leather shoes and a box clutch, all in the same shade as the dress. Whoever said that leather is tricky to pull off, clearly needs to take notes from Kendrick, like asap.

The mommy-to-be has been nailing maternity style every single time that she has stepped out. After walking for Tommy Hilfiger at New York Fashion Week, the model made her presence felt in a racy sheer dress at Rihanna’s SavageXFenty show. The all-black outfit got a pop of colour from the fluorescent sling bag and heels that Graham added to complete the look.

When the supermodel isn’t conquering runways, she is taking the streets by storm. Spotted on her way to the Michael Kors show, Ratajkowski wowed in a black belted catsuit paired with snake-print boots. She finished off the look with a classic cat-eye. So simple, but so chic.

Nicole Scherzinger gave us Grecian-goddess vibes in a flowy white maxi at Tory Burch’s New York Fashion Week show. She kept her look super off-duty with a floppy hat and a bucket bag. We are drawing inspiration from this outfit for our next beach vacay.

At Alexander Wang’s show, Sofia Richie went for a monochrome look. Black trousers paired with a white pinstripe shirt, the outfit was accentuated with a matching pinstripe bra that could actually pass off as a plunging neckline, cinched at the waist with a leather belt.

We have got to give it to Justice for bringing her A-game to the Cinq à Sept’s show where she wore a sheer bodysuit with velvet bell-bottoms and a silky pistachio overcoat. Talk about mixing it up with ease.