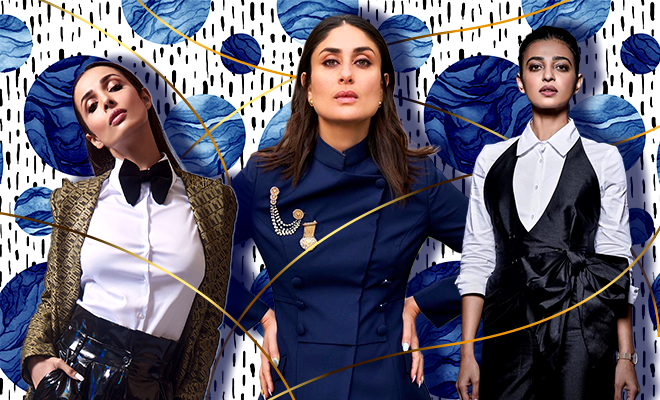 Fun Fact: Like a lot of other popular trends in fashion, androgyny for women was introduced by influential female figures who raised a voice in a male-dominated scene. Legendary designer Coco Chanel made cigarette pants for women cool and early icons like Marlene Dietrich made them even hotter. Androgynous fashion is all about bending gender rules, in a way making it a social movement more than a style one. And with the rise of gender-fluid EVERYTHING, it is only logical that we see this trend making yet another comeback at the celebrity fashion scene as well.

B-town’s best have been bringing the straight lines and structure of androgyny to their style and we are excited about it. Much like every other western trend that kind of make it but not really on our shores, this look has been sprinkled with desi blends and party season staples. We are adding one ‘Suited-To-The-Gods’ look in our list of outfits for December soirees and these are the 5 ways how!

ALSO READ: Sonam Kapoor Ahuja In A Tux Reminds Us Of How Much We Need To Have A Desi Bond Version Already

One of our top style stars this year has been Kareena Kapoor Khan. It is not because this woman looks damn hot in anything that she wears (which she does), it is because she has been pushing the boundaries of celebrity styling all year. One of her many experiments was this custom double-breasted ‘Bandhgala‘ suit from the heritage house label Raghavendra Rathore. She looks so dapper and the look is a great alternative for a saree for a gorgeous winter wedding.

Tuxedos got so much love from women this year we are delightfully surprised. I think it’s great to pick a femme-tux for a night of throwing back cocktails instead of an LBD that will end up un a ruched mess at the end of the night. Radhika Apte’s Jewellyn Alvares bow-detailed tuxedo vest ensemble is so smart. This ensemble belongs in a character-driven spy thriller and who better than in indie-darling Radhika to flaunt it.

ALSO READ: Radhika Apte’s Wedding Saree Was Her Grandmother’s Old Drape With Holes In Them. We Love How Wholesome This Is.

Malaika Arora’s outfit from Black Coral is made up of three distinct textures of a silk thread detailed jacket, PU holographic trousers, and a crisp white button-down. A big bow tie from Malan Breton finished the look for a formal yet quirky style to shine through. Usually, we won’t feel something like this, it’s just too busy, but lovers of OTT New Year ensembles can definitely rock it on a night out.

Got a glittery skirt that needs an update on the top? Pair it with a steady stitch like a long kurta or even a flared one. The trick is to keep your top and bottom halves look like they belong a whole other outfit entirely. Kriti Sanon’s Rajesh Pratap Singh set is a good example of how to make this beautiful contradiction work while still working with elements of male and female fashion.

If your bae won’t listen to you to put his fancy dinner jacket on for a party and steps out in yet another hoodie, it’s time you put it to good use yourself. Imagine walking in with sharp suiting instead of glittery cocktail dresses, isn’t that just the dream? Kiara Advani decked u had to toe in Massimo Dutti is such an NYE high fashion ‘mood’, we are lovin’ it!