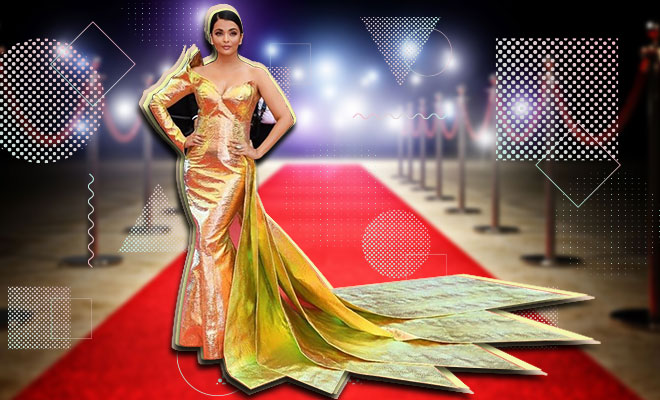 Here’s Why Aishwarya Rai’s Neon Snake-Skin Gown At Cannes Is The Biggest Disappointment!

The OG Queen of Cannes, Aishwarya Rai Bachchan served up the first look of her 2019 stint in the French Riviera. The iconic actress began her Cannes journey in 2000 alongside the cast of Devdas in a golden saree. Since then, Aishwarya has been a constant at the festival, with her sartorial game getting better with time. Quite like fine wine!

ALSO READ: Deepika, Sonam, Aishwarya: Why Is No One Wearing A Saree On The Cannes Red Carpet Any More?

We do have a few more looks to go through before Ash is done with Cannes, but we can’t say she’s off to a good start. Her first red carpet look is anything but impressive. The actress chose a neon gold, holographic mermaid-gown, a silhouette that we frankly think has been done a lot already.

An eccentric creation by Jean-Louis Sabaji, the high-shine gown was a big risk on the part of Aishwarya’s stylist. That’s where our disappointment lies. Aishwarya has become synonymous with bringing classic curated looks to the red carpet. Her lilac ball gown from 2017 was one of the best outfits that year. Just last year, Ash managed to take the cake in a peacock-themed gown with the most beautiful trail we have ever seen. Why Ash’s styling team put her in an experimental look too complicated for even her to pull off, is baffling to us!

The only saving grace with Aishwarya’s look was the sleek hair and makeup. The actress is known to be one of the most beautiful women in the world and even a misstep in styling can’t take that away. The highlighted cheeks, chic thick liner and a pinch of glitter drizzled on the ear lobe made for a wonderful beauty moment.

ALSO READ: Deepika Padukone Finally Came Through At Cannes In The Dramatic Gown She Always Deserved!

Aishwarya Rai Bachchan is a global celebrity with one of the most recognisable faces in the world. A quick research into her red carpet career will reveal the kind of voltage she can bring with elaborate gowns and a diva-like vibe not many can match. She is attending the Cannes Film Festival 2019 with her daughter in tow, and frankly, such a powerful moment should be complemented with the right outfit.

Keeping our fingers crossed for the rest of her Cannes stint!