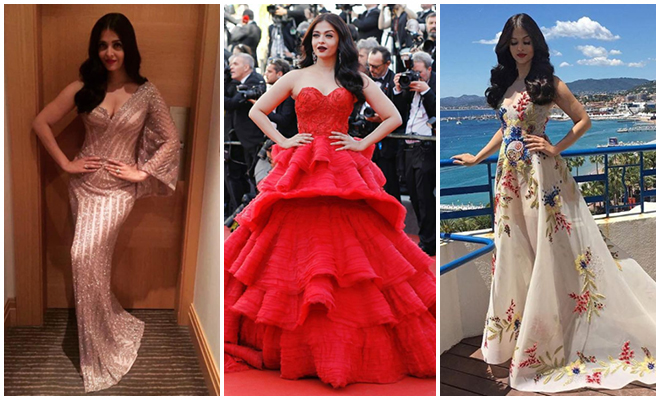 #Cannes2017: Aishwarya Rai Proves That No One Can Do Cannes Better Than Her!

Remember when we said we couldn’t wait to see what Ash and Sonam had in store for us at the 2017 Cannes Film Festival — especially post Deepika Padukone’s stunning turn on the red carpet? We honestly thought we’d get the same ol’ recycled red carpet looks, and boy were we wrong!

Days 3 and 4 totally proved that when it comes to representing Bollywood at Cannes, nobody can do it better than Aishwarya Rai Bachchan. Pretty much a veteran by now, Ash showed us that she is a total queen bee when it comes to slaying the red carpet.

The theme of her ensembles were so Disney princesses-inspired — whether it was her Michael Cinco ballgown or the red Ralph & Russo five tier gown — that she totally looked like royalty.

She has made it a point to make a statement on international shores, and doesn’t quite play it safe when it comes to either her makeup or ensembles. Do we have to remind you of the much-talked about purple lip again?

Scroll down to see this evergreen diva’s looks from the French riviera. You won’t be disappointed!

In a Yanina Couture gown

In a Mark Burngarner gown

In a Michael Cinco gown

In an Ashi Studio gown and Michael Kors heels

In a Ralph & Russo gown

In a Monisha Jaising gown and Giuseppe Zanotti shoes