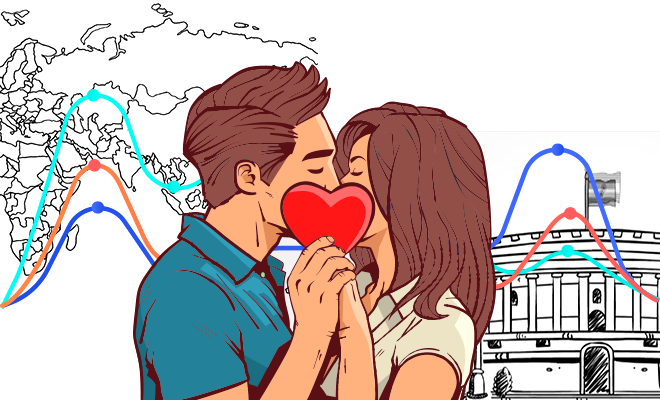 Your Political Beliefs Do Affect Who You Date. Would It Matter To You?

When I was in college, we didn’t meet on dating apps or scan a person on the basis of a checklist. It was all about connecting with someone, speaking with them and realising it’s them who makes you lose your concentration while studying Integration. I never intended to fall for my boyfriend in college and definitely didn’t have a list of pros and cons mapped out. But even without all of that calculation, it still was magical, to say the least. We still got along really well; maybe if we think with our hearts, we attract the people who vibe with us.

However, today nobody is dates without a checklist in hand. Maybe we are getting smarter at selecting partners and more conscious of what we seek. Or maybe we are getting more judgmental about people and rejecting them without even getting to know them. I can’t tell.

But here’s the thing. Some things matter a lot to us and we would want a partner to be on the same page. Is politics one of them? Would you care if a potential match was pro-CAA or anti-CAA? Would it matter to you if they were strongly left or right-winged? According to OKCupid, “A majority of people are open to dating someone who has a strong political inclination for the right or left wing (43 percent men and 37 percent women) as long as it’s not violent. Some people though would not even think about it (25 percent men and 29 per cent women). The remaining (20 percent men and 25 per cent women) are not sure and others would rather not comment (12 percent men and 9 percent women).”

However, when it comes to dating a person with political opinions exactly opposite to yours, 54% women said they wouldn’t while only 21% men said they would care. I guess, men are content as long as the sex is good! Political homophily seems to be more prevalent among women than men but why this gender discrepancy? Counseling psychotherapist Mansi Poddar told TOI, “Women are usually aware that political ideology is closely related to gender politics as well. It’s likely that a right-wing person will have different attitudes to women compared to a liberal.”

I personally wouldn’t like to date someone with political opinions contrasting with mine. For me, politics isn’t like a game we are participating in. The government affects our very socio-economic structure and if someone is supporting a move that’s discriminatory and will cause a lot of people to suffer, I cannot handle dating someone who would support that.

According to a study titled, Political Homophily in Social Relationships: Evidence from Online Dating Behavior, “We analyzed behavioural data from a national online dating community. We find that people evaluate potential dating partners more favorably and are more likely to reach out to them when they have similar political characteristics.” However, the study also indicated that it’s not just about sharing political ideologies but also a level of interest in politics. So if you’re interested in the subject, you will find it hard to be attracted to someone who is either ignorant or disinterested in the state of the affairs.

ALSO READ: 5 Reasons Couples Who Tease Each Other Are Happier, According To Science