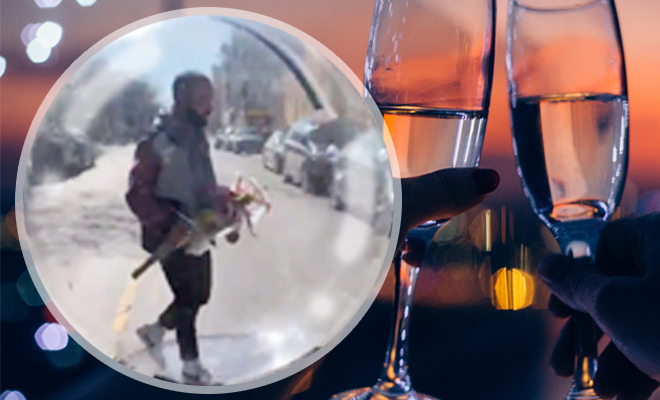 The Quarantine Cutie Went On His First Date With His Girlfriend In A Giant Bubble Because Social Distancing. Is He For Real?

When was the last time a guy really put a lot of effort in doing things for you? If it was anytime recently, then you’re so lucky because the last time that happened with me was probably years ago. Lately, I feel millennials don’t go out of their way for anything. And although I hate it, I believe it comes from a place of disappointment. It’s not like we don’t care but we care too much. We are sensitive and so we walk around with walls so high, they’re probably be visible from space.

We are all looking for a person who loves like they’ve never been hurt except nobody wants to be that person. But this guy here has been making us want to be cheesy again and how. This is Jeremy Cohen, a 28-year-old freelance photographer in NYC who recently became viral as he asked out a girl across the street using a drone.

I can’t believe this actually worked and yes this is a real story pic.twitter.com/X5KbBl0qIe

Tori Cignarella, a 23-year-old hospitality professional was dancing on her building’s terrace when she noticed a guy from a building across the street waving at her. He sent over a drone with his phone number and that’s how their love story began. Social distancing wasn’t allowing them to go real dates, so they were having virtual ones all these days.

How to date during Quarantine (PART 3) pic.twitter.com/2ER4UX4FN0

In a new update, Jeremy went out of his way to actually meet her in person , but not without precautions. He walked into a large transparent balloon and went to meet her with flowers and hand sanitiser. Of course, he didn’t think it through as he couldn’t really give her the flowers because well, he was inside a giant bubble. But it sure made her smile.

They walked around the streets and were stopped by a few cops but just for a selfie! I mean, even they must have not seen someone put so much effort into a date in today’s times. This is really so cute, and the updates make it even more interesting. It’s like watching a series. We are invested and we want to know what happens next. In fact, several netizens are rooting for them; some even want them to get married! “You 2 better get marrried (sic),” wrote a user.

ALSO READ: A Man in NYC Asked A Woman Out Using A Drone And Now They Are Enjoying Their Virtual Dates. Why Don’t I Have Such Neighbours?

Another user spoke what feels like for all us, “Meanwhile this one guy won’t even text me first lmaooooo.” Seriously, rest of the guys, buck up!

ALSO READ: #SpreadPositivity: This Dance-off Video Of A Grandpa And Granddaughter Duo Amidst Social Distancing Times Is Bringing Us Cheer